The Butcher of Cidaris is a quest in The Witcher 2: Assassins of Kings.

In the canteen of the Kaedweni camp, Geralt meets a man named Manfred who is sipping vodka alone. The witcher invites himself and offers to buy the man a drink. Manfred agrees and proceeds to tell Geralt about his son Sven who has decided to challenge Letande Avet, the Butcher of Cidaris, to a duel to the death, and Manfred has no doubt that this will be Sven's and not Letande's death.

Geralt convinces the old soldier to let him help Sven somehow. Ouside the canteen, Sven is practicing his skills on a training dummy. The witcher strikes up a conversation and after a bit of arm-twisting, manages to convince the boy that he can retain his honor by making it a 2-on-2 duel with the witcher as his second. Geralt then goes off in search of the Butcher of Cidaris to challenge him to the duel.

When he finds Avet and challenges him, another knight, Edwin "The Petal" Leistham, volunteers to be Letande's second. At first Avet just ridicules the man's name, but ultimately accepts him.

The duel takes place in the Arena.

On his way to the camp canteen, Geralt witnessed an argument between a father and a son. Though the witcher usually stays out of family quarrels, this one looked like a matter of life and death. Our hero had the mystery of the conspiracy against Henselt to solve and needed information. He had precious few friends in the camp but knew from experience that he'd be more likely to get a back scratch if he gave one first. Do someone a favor and they're likely to pay you back in kind. Geralt decided to talk to the old soldier. As it later turned out, this was a very good decision.
The old soldier was named Manfred. He needed help an agreed to help in the witcher's investigation on the condition that first Geralt will help out his son, Sven.
Sven was hot-headed. He wanted to face the famous Butcher of Cidaris in an arena duel. The lad would surely perish, so Geralt decided the fight would be in tandem, two against two. Now he only had to convince the menacing Letande Avet.
The Butcher of Cidaris did not need much convincing. Geralt went to get Sven and together they returned to Avet's tent. In the meantime, the Butcher of Cidaris readied himself for battle and awaited the arrival of his opponents.
If Sven survives:

Not belittling anyone, Sven had a lot of luck, and Geralt some brains. Their opponents were defeated mainly because of the witcher's inhuman abilities. He however, thought nothing of a winner's fame. He solved Manfred's problem and expected the old soldier to tell him about the conspiracy.
Seeing his son in one piece, and basking in the glory of Letande Avet's vanquisher at that, Manfred was immensely happy. The old soldier kept his part of the deal and told the witcher everything he knew about the conspiracy.

Geralt is a proficient and experienced swordsman, which means, among others, that in battle he looks after himself first. Sven proved to be hot-headed and lacking in ability, so he died. The witcher was not able to save the boy. With a heavy heart, he went to bring the bad news to his father.
The news of his son's death was a great blow to Manfred. Geralt didn't meet his expectations, but the old soldier helped him despite that, telling him everything he knew about the conspiracy. 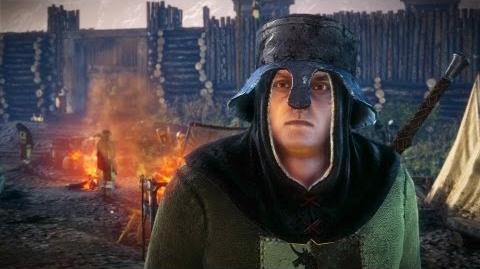 The Butcher of Cidaris (The Witcher 2) Full HD
Retrieved from "https://witcher.fandom.com/wiki/The_Butcher_of_Cidaris?oldid=512481"
Community content is available under CC-BY-SA unless otherwise noted.