q2015_grandpa
The Cannibal is an optional quest in Chapter II which begins when Geralt finds half-eaten human remains in a hut in the Swamp.

The only way Geralt can obtain this quest is by visiting Gramps' hut. Gramps can be there when he does, but Geralt must audibly acknowledge the human remains before talking to Gramps to receive the quest. As he does, he will notice half-eaten human remains, evidently "dinner" leftovers and remark that a cannibal must live there.

If Geralt discovers this before speaking to Gramps about his pilgrimage to the Shrine of Melitele, that quest is no longer an option during that conversation. To do both quests, Geralt should accompany Gramps to the shrine before going to his hut as the trigger is when Geralt looks around and sees gnawed bones.

Both quests are optional, but they also provide some useful opportunities for experience and loot.

If you decide to kill Gramps, after meeting him in his hut, he will run outside. Once you go outside too Gramps will have backup in the form of a circle of 5 Echinops and a unique Archespore in the middle (has Gramps been growing them?), so be prepared for a tough fight. If you are low level then best idea is to stay hidden behind the hut and wait for Gramps to come to you, then kill him and next kill off the weeds one at a time using Igni and running back behind the hut. While there is no specific oil that works against Echinops or Archespore's Argentia will increase your damage against them. Also if you have not yet killed the Coccacidium then it will most certainly join in too, so it's best to kill it before starting this quest.

It turns out that Gramps, whom I took to the Melitele chapel, is a cannibal... I wonder what I should do with Gramps the cannibal... (500 XP)

Information / Death of a Cannibal 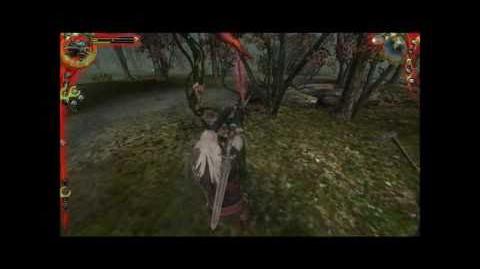 The Witcher The Cannibal-Killing Everything (Hard) HD
Retrieved from "https://witcher.fandom.com/wiki/The_Cannibal?oldid=483818"
Community content is available under CC-BY-SA unless otherwise noted.