The Eternal Battle is a quest in The Witcher 2: Assassins of Kings.

This quest begins as soon as Geralt arrives into Vergen with Iorveth. During a meeting with King Henselt and his allies, a powerful curse is awakened and a spectral mist appears, enveloping the Battlefield. Speaking with Philippa Eilhart at her house in Vergen, Geralt learns that to break the curse, he needs to collect some artifacts: a symbol of death, a symbol of hatred, a symbol of faith and a symbol of courage. He must retrieve the first two, death and hatred, while the sorceress promises to take care of the others.

Once the witcher has collected the items (the Standard and the Commander's sword), he must then go back to Philippa Eilhart and tell her that he is ready to proceed with the ritual. The sorceress tells him that the spirit of the Visitor, Vandergrift has changed and a powerful demon of war, a draug, has taken his place. Geralt must then proceed then to the entrance to the Battlefield and enter the mist.

The quest begins immediately after Geralt accompanies King Henselt and his entourage out of the Battlefield and the spectral mist, which has just appeared because of the awakening of a curse. Speaking with Dethmold in his tent, Geralt learns that he needs 4 artifacts to break the spell: a symbol of hate, a symbol of death, a symbol of the faith and a symbol of courage. He also needs to appease Sabrina Glevissig's ghost, by preforming a ritual with the cooperation of the king.

Once the witcher has dealt with all his tasks, he must return to Dethmold and tell him he is ready to proceed. The sorcerer then tells him that the spirit of the Visitor has changed and that a powerful demon of war, a Draug, has taken his place. Geralt must then leave the Kaedweni camp and enter the spectral mist.

As soon as Geralt enters the mist, he is possessed by one of the ghosts and a battle begins. First, he relives the experience of one of the soldiers who was in the battle three years ago, under the Aedirnian banner. His task: to take the standard from the enemy. During this possession, Geralt cannot use his witcher abilities: he can only hit and parry. He faces three wraiths and a Draugir, in a fairly restrictive area. (Note: You can't save your game at this stage, but at the end of any cutscene, the game will save automatically).

This battle can be rather annoying and difficult: try not to be hasty, especially on Hard and Dark Mode. Limit yourself to parrying all the coming blows and avoiding the Draugir's charges. Focus on one enemy at a time. You can press

to lock onto a target. Kill them one by one and leave the Draugir until the end. Fortunately, they have relatively few hit points each, so it only takes a few blows for them to go down. Another way of killing the soldier wraiths is forcing them into the ring of fire that surrounds the battle area, once the soldier wraiths flail about when set on fire they will probably burn to death without further interference. Use the riposte ability against the Draugir to kill it, it can also be set on fire but is more resistant and will continue to attack regardless.

After the fight, a second vision begins. This time your task is to bring a message to the unit commander. All you have to do is running, avoiding the flaming arrows rain. You can hear the sound of a horn announcing incoming arrows every time. So do not dawdle and run behind the barricades. Remember not to wait too long behind them, because a second round of arrows may be sufficient to burn and destroy them.

This part can be extremely stressful because, if you get hit even once by the arrows, you die. You must be very patient and calculate well the time between the two horn blows.

In the next scene, Geralt sees Vandergrift, the commander of the opposing army - who has become a Draug - talking with Sabrina Glevissig complaining about her poor results in the battle so far and threatening to inform Henselt. The scene then switches to Sabrina consulting with the Lodge of Sorceresses about using Melgar's Fire to win the battle and destroy Vandergrift at the same time. In the next scene, Geralt is possessed by the ghost of Seltkirk. As Seltkirk, Geralt must fight the enemies he meets along the way and once again he has no witcher skills at his disposal. He can only block and hit. This time, however. the fight is much easier.

Use the counterattack (if chosen in the swordsmanship tree) against the enemies and try to block all incoming blows. At the end of the scene, finally you take the role of Geralt and face the final boss.
If you approach the second group carefully, you might be able to lure them out one by one.

All you have to do is avoid the charges of the Draug, the meteor shower and the whirlwind, into which the draug occasionally transforms. You cannot parry its blows in any way, they are too strong. Dodge them by pressing

. When the Draug shouts "Archers!", find cover behind the rocks to avoid the flaming arrow volleys. When the Draug shouts "Trebuchets!" it means that a meteor shower is coming. In addition to the vitality bar, it also has a shield bar, that must be depleted unless you are attacking from behind. The best strategy is to cast Quen or Yrden, although the Draug has a high resistance and it may take a while to trap him.

When you finally defeat it, loot its remains, which include some crafting components to make the Draug armor. (In the enhanced edition Geralt will automatically loot the body of the Draug)

Once the curse is broken, Geralt witnesses a scene where Seltkirk laments the falling meteor storm. Another ghost then possesses him, a priest this time. His task: to lead some soldiers to safety, using the palisades to as shields from the incoming attacks. This task is much easier than the previous tasks.

Once the soldiers have been led to safety, Geralt witnesses another scene with Henselt sentencing Sabrina to death, for casting the fire storm on the army, causing the loss of his men. Geralt also recovers another one of his memories, this time remembering when he met Letho, while saving the latter against a beast that nearly killed him.

In the world of wraiths, only those relics the ghosts had a connection to in life have any meaning. Geralt and Dethmold agreed that they would need items symbolizing war, specifically, objects representing the concepts of hatred, courage, faith and death. The witcher thus began his search for the Dun Banner's standard, the symbol of death, for the sword that had belonged to the infamous and odious General Vandergrift, and for a piece of the armor that had once belonged to the brave Seltkirk. The symbol of faith - a medallion – was in Henselt's possession.
Thus the witcher acquired all the relics. He was ready to lift the curse from the battlefield, so he went to talk to Dethmold.

In the world of wraiths, only those relics the ghosts had a connection to in life have any meaning. After conferring with Philippa Eilhart, Geralt ascertained that he would need items symbolizing ideas linked to war, specifically, objects representing hatred, courage, faith and death. The witcher thus embarked on a search for the Dun Banner's standard, believed to be the symbol of death, and for a sword that had belonged to the infamous commander named Vandergrift, purported to symbolize hatred. The sorceress promised to find a medallion symbolizing faith and a fragment of a suit of armor that had belonged to the brave Seltkirk.
And so, Geralt acquired those relics within his reach, and went to see Philippa, who promised to find the others.
Just as she had promised, Philippa provided the armor fragment and the medallion. She was, after all, a mistress of magic, wasn't she?
Thus the witcher had acquired all the relics. Ready to lift the curse from the battlefield, he went to see Philippa.

Armed with artifacts and some good advice, with his heart in his mouth, Geralt set off to take part in the spectral battle. His resolve to lift the blood curse had never been stronger, for he realized that Cedric's prophecy could be taken literally - dispersing the mist could restore the witcher's memory. Within the mist, a worthy foe already awaited Geralt.
Now listen how Geralt achieved the impossible. How he ended the blood curse and defeated a draug, a creature that never should have set foot in this world. Witchers and poets know well that wraiths are beings trapped in an illusory reality, forever damned to repeat events from the past. Defeating them is only possible through entering that reality, the only true reality for them. And so, Geralt entered the mist as an Aedirnian soldier, thus declaring for one of the sides. He had to change the course of battle, that is defeat the Kaedweni standard bearer and capture the banner he carried.
So, how did Geralt lift the blood curse and defeat the terrifying leader of the wraiths? Well, he did it like a witcher would. He knew the battle was taking place in a reality born of evil magic. That reality consisted of the ghosts of the fallen, and they could be reached only by entering their world. Geralt had to change the course of battle, so he entered the mist as a Kaedweni soldier. He ran to his commander to inform him that the enemy had captured the standard, and to warn him about a possible ambush.
Entering the mist this time, Geralt joined in the battle between the wraiths of Aedirnian soldiers and those of Kaedweni soldiers. The witcher assumed the all important role of the heroic Seltkirk, fighting under the sign of the chevron. Our hero faced a difficult task - he had to fight his way through the battlefield and defeat the Kaedweni army's general.
Pushing through the battlefield, Geralt spotted a Kaedweni general. Defeating the wraith would disrupt the scenario of the eternal battle, so the witcher did not hesitate for one moment.
Sorceresses took part in the battle. Though regular Kaedweni forces won the advantage, the magicians began a sorcerous barrage. Fireballs decimated both sides, and Geralt could only gather his unit and lead it out of the battle, to the king's position. 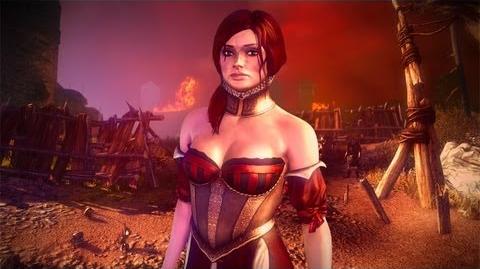 Retrieved from "https://witcher.fandom.com/wiki/The_Eternal_Battle?oldid=512521"
Community content is available under CC-BY-SA unless otherwise noted.