The Ghost in the Tree

View source
watch 01:42
What is The Ghost in the Tree?
Do you like this video?
Play Sound

The Ghost in the Tree

The Witcher 3: Wild Hunt
Gwent: The Witcher Card Game
The Ghost in the Tree was the spirit of a druid, located beneath the Ancient Oak in a forested area south of Downwarren.

A lot of mystery surrounds the spirit but one thing appears to be certain: she wasn't human and the Crones killed her (or rather, destroyed her body) then captured her spirit and imprisoned it in the tree. The full truth of why though is never revealed.

Many locals appear to believe the book She Who Knows, where the spirit is described as someone who arrived from far away and created three daughters and watched over the land. Locals would bring sacrifices like grain and men to her every Spring, but she started to slip more and more into madness to the point the land and its people were being destroyed. To save the area, the daughters killed their mother and imprisoned her immortal spirit.

However, as many locals worship the Crones, and considering the long amount of time that's passed since the Lady of the Wood walked the land, the book may not be entirely truthful.

If Geralt spared the spirit: Transformed into a black mare, the spirit rode into Downwarren to take revenge for their attempts on its life by possessing all the villagers save for the ealdorman. It then made all the villagers go crazy so that they killed each other, leaving a massacre in its wake.

The Whispering Hillock – if the world were not as it is but as it should be, this name would denote a place of hidden nooks and lovers sharing heartfelt lies in hushed voices. Instead, it stood for danger and terror, for a place where wild animals, driven by some mysterious power, had killed many an inhabitant of Downwarren. Geralt agreed to investigate the problem, and soon discovered the animals were controlled by a spirit entrapped in a tree growing atop the hill. The spirit spoke to him in a woman's voice, and claimed to have once been a druidess who had kept watch over the Velen grove until the Crones murdered her and imprisoned her ghost in the tree. The forces of nature she had once served now protected her from the fiendish sisters' further designs. The unfortunate locals had died as collateral damage, for, the spirit attested, nature's wrath is unrestrainable and distinguishes not between unwary innocents and unwelcome ill-wishers.
The spirit begged Geralt to lift her curse and free her from her torment. In exchange, she promised to rescue the orphans from the swamp clearing, who would otherwise face a cruel death at the hands of the Crones.
If Geralt decides to kill the Ghost in the Tree:

Yet too much innocent blood had been spilt on the Whispering Hillock. Geralt did not believe the spirit's explanation and destroyed its cursed heart. In doing so he expulsed it from this world for good.

If Geralt decides to spare the Ghost in the Tree:

These whispered words convinced Geralt and, following the spirit's instructions, he lifted the curse, transferring the druid's ghost into the body of a black mare. And so the spirit was set free, and the dark powers afflicting the Whispering Hillock were dispersed. 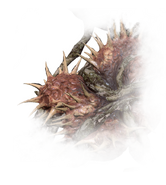 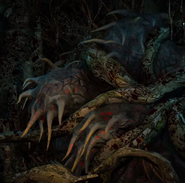 Location of the Ghost in the Tree 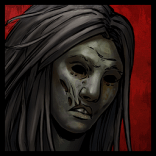