The Isle of Mists (quest)

The Isle of Mists

The Battle of Kaer Morhen

Ekhidnae
Harpies
Tangalores
Bilge hags
Fiend
The Isle of Mists is a main quest in The Witcher 3: Wild Hunt.

Important: numerous quests, some of which involve major sub plot content, will be failed or rendered unavailable after the warning given at the beginning of the quest. See Cutoff Point below for more.

It's best to pack a few Repair Kits before you do this quest, even if you won't need them for this quest you may need them for the quests that will follow and gear repairs will become limited for a while. If you are certain you are ready to go then go to Skellige and take one of the three marked boats on your minimap. Once you do you can fast travel with your boat to Undvik to make the trip shorter. After you get near your destination the game will ask if you wish to save it as this is a vital moment in the story, so you can agree or not and right after it will ask you if you are certain you wish to go, after you agree Geralt will release the Magic firefly and you are moved to the Isle of Mists.

Ciri and the 7 dwarves[]

Inside the hut are dwarves, however they will refuse to let Geralt in and he will have to find their friends Ivo, Gaspard and Fernec.

While searching for Ivo you will likely encounter some Harpies and/or Bilge Hags. Ivo will yell out to you when you get close enough while his is sitting on a rock arch. Once Geralt speaks to him he will decide to fly down to him, unfortunately he will make an "extreme emergency landing."

To find Gaspard you have to go to the lighthouse, then climb the ladder to the top. Once there you will find Gaspard sleeping after waking him up and agreeing to protect him along the way to the hut, you will need to escort him and keep waking him up as he is suffering from narcolepsy. Once you reach the hut Gaspard will stay there, if you found the other 2 before escorting him the dwarves will now open the door if not go search for the remaining dwarves.

Ferenc will already be dead when you find him, he was killed by a Fiend, so avenge him and search his body.

Note: If you wish to explore the island then best to do it now as you won't have another chance if you continue the quest.

Once you are done go back to the hut and the dwarves will let you in, however it appears that Ciri is dead and Geralt is devastated. However, once Geralt hugs her body the firefly will awaken her and she will hug him back. Now you can talk to Ciri or tell her there is no time to waste as the Wild Hunt may appear any minute. Regardless once you tell her it's time to leave they will make their move either way so feel free to chat with Ciri all you want as the result is the same. After the Wild Hunt makes their move Geralt will ask Ciri to teleport both of them to Kaer Morhen where you will be greeted by Vesemir followed by Yennefer and finally Triss and the quest will end.

Note: Note Yennefer will kiss Geralt regardless if you romanced her or not. If you romanced Triss, Yen will ask if Geralt and her need a moment or vice-versa. If however Geralt was two-timing things will turn awkward!

After a long search Geralt was at last a step from his goal. Avallac'h had hid Ciri from the Hunt on the magical Isle of Mists, which could only be reached if fate deemed one worthy - or by following a magic firefly, which was decidedly the easier option. Geralt thus readied himself to sail to the isle and bring back Ciri.
Finally. After years of separation, weeks of searching, dozens of false trails and endless worry, Geralt had found Ciri. They were not given long to celebrate their reunion, however. As soon as Ciri awoke from her magic slumber the Wild Hunt picked up her trail and began to attack. Geralt and his adopted daughter thus had no choice but to use Ciri's special abilities to flee to Kaer Morhen and face their attackers there.

The following quests fail or become unavailable if they are not completed before entering the Isle of Mists: 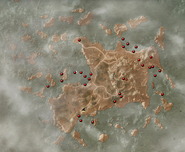