Sword of Destiny
Blood of Elves

Sword of Destiny
The Last Wish (Polish: Ostatnie życzenie) is the first book in Andrzej Sapkowski's The Witcher series in terms of story chronology, although the original Polish edition was published in 1993, after Sword of Destiny.

Audible UK, in conjunction with Orion Books and Gollancz, released The Last Wish audio on February 27, 2014, only a few short weeks after it was announced. The Last Wish is read by Peter Kenny.

The anthology employs the story within a story framework and contains seven main short stories.

Geralt, after having been injured in battle, rests in a temple of Melitele in Ellander. During that time he has flashbacks to recent events in his life — each of which forms a story of its own.

There are two audio versions of The Last Wish available in Polish. Classic audiobook, lasting about 11 hours and read by Roch Siemianowski, was released by superNOWA (Polish publisher of Sapkowski's works) in 1996.

In 2011, after the huge success of audio play based on Sapkowski's Narrenturm, Fonopolis and audioteka.pl released audio plays based on The Last Wish and Sword of Destiny. The Last Wish, lasting about 12 hours, was voiced by 52 actors, including Krzysztof Banaszyk (Vernon Roche in Assassins of Kings) as Geralt, Anna Dereszowska as Yennefer, Sławimir Pacek (minor characters in video games) as Dandelion and Krzysztof Gosztyła as narrator. Samples from all short stories can be found on audioteka.pl's site.

A movie adaptation announced for 2017 states that it: "will be based on themes from the short stories 'The Witcher' and 'Lesser Evil' from 'The Last Wish' collection. Tomasz Bagiński, who had been nominated for an Oscar for his film, 'The Cathedral', will be the director."

Hardcover edition (together with Sword of Destiny). 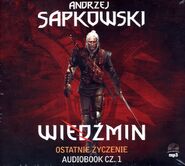 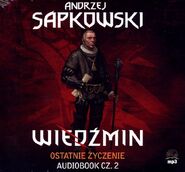 Lithuanian edition of both The Last Wish and Miecz przeznaczenia.

Russian edition of both The Last Wish and Sword of Destiny.