The Messenger is a quest received from Baron Kimbolt in Chapter III. The mission is to intercept a message from Count Maravel to the Nilfgardian representative in Loc Muinne. This message might prove that Count Maravel is a collaborator with Nilfgaard and thus a traitor to Temeria.

Once you can start following your target, no matter how sneaky you are, the messenger and his bodyguards will notice you behind them. After that discovery, you have to fight his two henchmen and past them a squad of Nilfgaardians. After these small battles, you face the messenger himself, who is a mage.

The fight itself isn't too hard but you need to figure out how to damage your opponent. The mage attacks you only by summoning fireballs from above. Luckily, these can be easily evaded because you can see where the spell will hit by notifications on the ground. The tricky part is the mage instantly teleports away if you approach him. In order to defeat the mage, you have to learn his teleport spots in the arena (there are 4 of them and he picks them in particular order) and place the Yrden sign on his next position. Then when you approach him, he will get trapped, giving you chance to harm him.

There is a case where Gargoyles appear with the mage and make this match more difficult. The gargoyles appear while the mage is talking and start attacking before the player has a chance to defend. Players who have completed The Gargoyle Contract will not face any Gargoyles, so it is highly recommended to finish that quest before tackling the Messenger.

You can loot the messenger's dead body for the Count Maravel's Correspondence, in which you find out Maravel's innocence or guilt.

You may recall that Geralt managed to prove that the letter ordering Boussy's convoy to change course had been forged. Needless to say, Baron Kimbolt was immensely pleased, for he was no longer suspected of being responsible for the disappearance of Foltest's bastard. The baron, a sly fox where politics was concerned, counterattacked immediately, providing our hero with a new lead. The witcher was to intercept Count Maravel's messenger and strip him of whatever scrolls he was carrying. As Kimbolt told it, any letter would prove that its author was a Nilfgaardian collaborator and thus a traitor to Temeria. And this traitor could very well have orchestrated Boussy's disappearance. Thus encouraged, Geralt directed his steps towards the fountain in Loc Muinne's central square, where he was to meet Aldrich, one of Baron Kimbolt's spies.
Aldrich led Geralt to the place where he could intercept Maravel's messenger.
As they waited, they chatted to kill time.
They had not been chatting long when the messenger appeared-one Hieronymus Lash. At the sight of our hero, Lash squeaked like a bird and began to flee. Geralt gave chase, for what else was there to do?
When Geralt caught up to him, the messenger resisted. The witcher had no choice but to kill Lash and search his corpse.
Upon reading Maravel's letter, Geralt understood he had hit the bull's-eye. The count was indeed collaborating with Nilfgaard. He had arranged the attack on the convoy carrying Boussy and Anais in a bid to abduct the royal bastards for the Emperor. Thus he had had a hand in the boy's death. Even if the count had not intended the latter, Geralt had no choice. He set off to see Interrex John Natalis to present his charges and the evidence supporting them. 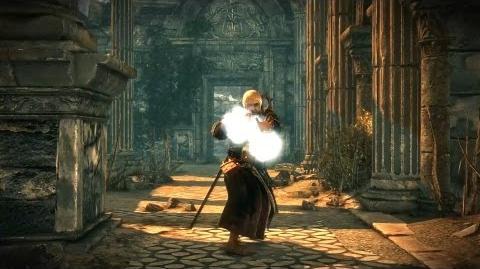