The Mighty Numa was a circus performer and arm wrestler who can be found with Marcus, his assistant, southeast of the tower near Loc Muinne's central square during chapter III.

Mighty Numa's moniker was not baseless. This huge man supposedly had inhuman grit which he was liked to show off by, among other things, arm wrestling. He had no equal in this discipline. They say his grip could crush the hands of weaker opponents. Many tried to win the title of champion from him, yet nobody had managed to best him at this competition. 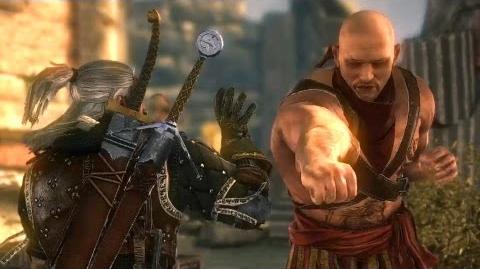 The Mighty Numa (The Witcher 2) Full HD
Retrieved from "https://witcher.fandom.com/wiki/The_Mighty_Numa?oldid=526589"
Community content is available under CC-BY-SA unless otherwise noted.