The Price of Neutrality

Edit
watch 02:56
Raise a Floppa - The Loop
Do you like this video?
Play Sound
Infobox Needed
This article or section needs an infobox template added.

The Price of Neutrality is a premium module for The Witcher, created by CD PROJEKT RED and released on April 10, 2008, together with the D'jinni Adventure Editor. The original adventure required Patch 1.3 to work, but had no voice acting. The next patch, version 1.4 or The Witcher: Enhanced Edition, added Side Effects premium module, and voice acting for both modules.

While the plot itself is new, the locations were originally meant to be included in the main game, but were cut from the final version.

The famous bard Dandelion has stopped by at an inn. Naturally, the patrons wish to hear a ballad and so he sings the lay of the "Bitter, Evil Hearts".

Set in the fall of 1232 in the valley surrounding Kaer Morhen, the ballad finds Geralt coming back to the witchers' home for the winter when he unexpectedly spies a small camp just outside the stronghold. This comes as quite a surprise since the way to Kaer Morhen is a closely guarded secret. One could count on one hand the number of non-witchers who know the way.

At the camp, Geralt meets prince Merwin Ademeyn of Caingorn and a sorceress named Sabrina Glevissig, who, along with a band of mercenaries commanded by the dwarf Merton Bringgs, are travelling under the protection of a royal decree signed by Henselt, the king of Kaedwen and the suzerain of Caingorn. The party is trying to find and capture a young woman who has claimed refuge within the witchers' fortress.

Born under the Black Sun and prophesied to ruin the world, the young woman at the heart of the matter is Deidre, the rightful heir to the throne of Caingorn due to its non-discriminatory laws of succession. She is Eskel's surprise child, after he saved her father's life years prior, but never came back to claim her for witcher training. Sabrina believes Deidre is cursed, evil and extremely dangerous to any who encounter her. She wishes to vivisect Deidre and discover the truth behind the Black Sun prophesy, while Deidre's younger brother Merwin desires to ensure that she is not a threat to his rule in Caingorn or position in Henselt's court.

Geralt has ample opportunity to consult with his fellow witchers: Eskel, Lambert and Vesemir who are all wintering at the old fortress, all with differing views on how to approach the matter in respect to their witcher neutrality. He will also have time to hear the stories of both Deidre and Sabrina, and get to know both much better before finally making his decision.

Geralt has two options ahead of him. He can sway the witchers to hold to their neutrality and deny Deidre sanctuary within Kaer Morhen, casting her out the fortress to fend for herself against Sabrina's machinations. Alternatively, he can choose to convince the witchers to protect Deidre, and force Merwin and Sabrina to let her be, even if this risks earning the ire of Henselt in the process.

If Geralt chooses to evict Deidre, she lashes out at Eskel, lacerating his face and stabbing him in the gut before fleeing. For the next two years, Deidre rampages across southern Kaedwen, killing and terrorising the population as an outlaw. Sabrina heals Eskel's stomach wound, but she demands the witchers completely excuse themselves from Deidre's fate. Should Geralt give his word that the witchers will remain out of Sabrina's way, she will eventually track down and execute Deidre. In the resultant autopsy, no abnormalities are found. If Geralt refuses to promise that the witchers will not be involved, then Deidre is slain two years later by Eskel, who claims no reward or recognition for ending her reign of terror.

Should Geralt choose to shelter Deidre, the witchers convince her to give up her royal claim in hope of a peaceful solution with Merwin. However, when attempting to finalise the deal with Merwin and Sabrina, tempers flare and violence breaks out. In the ensuing melee, Deidre slays Bringgs and carelessly slashes Eskel across the face, while the remaining three witchers are forced to kill all the mercenaries. Geralt then determines to bring an end to the feud. If Geralt tries forcing Deidre to back down, she furiously resists and is cut down by the witcher, embittered by Eskel's injury. Merwin's subsequent rule of Caingorn is weak, exploited by Henselt to increasingly subsume Caingorn into Kaedwen. If Geralt convinces Sabrina to withdraw, she does so under sufferance, allowing Merwin and Deidre to reconcile. They become joint rulers and lead Caingorn into a prosperous era, although Geralt debates whether the deaths of Bringgs and his men were too steep a price for such an outcome.

Regardless of the choices made, Dandelion ends his ballad, noting that the witchers do not talk about Deidre, but each of them carries part of her in their memories.

References to the books[]

The story shares many similarities with the short story "The Lesser Evil".

The story also quotes quite a lot about the Black Sun and the girls born under it, and the discussions Geralt may partake in with Sabrina Glevissig are more or less a repetition of the ones he shared with Stregobor, whereas certain parts of the dialogue exchanged between Geralt and Deidre echo conversations between Geralt and Renfri. There is even a book within the game called The Curse of the Black Sun.

Sabrina Glevissig herself is a character that appears in the Witcher saga.

Inconsistencies with the books[]

"The Price of Neutrality" takes place before the Witcher saga, even though in the books Geralt first met Sabrina on the Thanedd Island, in Time of Contempt.

The mention of the duchy of "Vspaden" in the journal entry for Kaedwen is an error based on a fan-made map from Andrzej Sapkowski Zone, even though CD PROJEKT RED created a more correct map of their own for the game, which does not include it. The fan-made map includes the duchy based on a (misspelt) reference to Yspaden in "The Lesser Evil". According to Andrzej Sapkowski's own notes, which were released after the map was created, Yspaden is a city in Redania.

This being a ballad and knowing Dandelion's tendency to artistic license, this might explain the inconsistencies. Perhaps it is even his version of "The Lesser Evil". 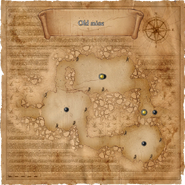