The Queen Harpy Contract is one of three possible contract quests in Chapter II of The Witcher 2: Assassins of Kings.

Harpy Queen Contract
Attention! I hereby place a bounty on the harpy queen or, as some call her, the mother harpy. Be warned that the beastie is no nestling. Many would-be killer has shattered his teeth on her, so the fight will be difficult. The brave soul that rids us of this winged bitch will not regret it.
Cecil Burdon, Alderman

This contract is easily completed in conjunction with the story quest given to you by Philippa to extract a dream crystal from the Harpy's cave. In order to unlock the Harpy cave at the bottom of the quarry, you must first collect the dream crystal located in the ruined tower near the crypts. Talk to Philippa about it, and then talk to Cecil Burdon about it to unlock the cave.

The harpy queen will appear with a retinue about five strong as soon as you pick up Letho's dream crystal. It is easy to get mobbed by them, and the Queen can inflict bleeding, so be careful. Use Quen liberally and try leading them into tight areas in the cave so you only have to fight one or two at a time. Fire and incineration are particularly effective against Harpies.

The Vergen elder announced a reward for killing the harpy queen. I could use the additional money.
The Harpy Queen dove at Geralt with her talons, and her sisters mounted a fierce defense, but the witcher prevailed, defeating all the beasts. A kingslayer he was indeed! He want [sic] off to see the alderman, brandishing his newly won trophy.
Cecil Burdon spared no expense and everyone breathed a sigh of relief after the harpy queen's death. Their dreams and nightmares returned. The people of Vergen would again have a reason to fall asleep in the evenings and rise in the morning. 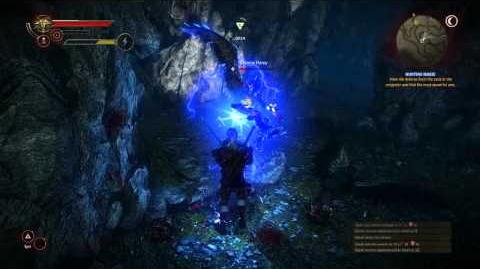