A Most Uncommon Wine
Strangers in the Night
Suspect: Vincent Meis

q2116_rat
The Rat is an optional quest in Chapter II which Geralt can undertake for Coleman. It involves clearing some ghosts out of a house for the dealer.

Geralt meets Coleman at The Hairy Bear, in the back room. When he asks if Coleman has any work for a witcher, the latter admits that he does (only if Geralt has updated Suspect: Vincent Meis quest to the part where he needs to visit the warehouse at midnight, otherwise he will not offer the quest). He needs a house cleared of ghosts which are wreaking havoc inside. The witcher accepts and promptly heads over to the address supplied by the dealer.

Once inside, he is greeted by two wraiths. He quickly dispatches the wraiths and returns for his reward, only to find that Coleman is nowhere to be found. Asking around the inn a bit, the innkeeper tells Geralt that Coleman can be found on the Dike collecting transports in the evening, granted that the witcher share whatever he could learn about Coleman.

As soon as the witcher set foot on the Dike, he caught Coleman chatting suspiciously with one of the city guard. Knowing well how dangerous these witcher bunches can be, it didn't take much of a convincing for Coleman to share the reason why he is here: He is the informant of Vincent Meis, and has been helping him dismantle Salamandra!

With that information, the quest approaches its end with the final decision for our hero: give Coleman's secret away to the innkeeper for some gold, or not?

Coleman is nowhere to be found. Luckily, the bartender told me Coleman can often be seen on the Dike and simultaneously warned me not to do business with him. I'm supposed to come back later, the innkeeper wants to know what Coleman's up to. I must go to the Dike and see Coleman.

I met Coleman on the bridge. It turns out he's Vincent's rat. That's a very useful piece of information... I need to go to the innkeeper who will be very glad to pay for the denunciation. But do I really want to expose Coleman? (100

Not so nice path: Coleman won't snitch on anyone anymore. I gave him away to the innkeeper, who in turn works for Ramsmeat. (500

Nice guy path: Coleman's secret is safe with me. Vincent should appreciate it. 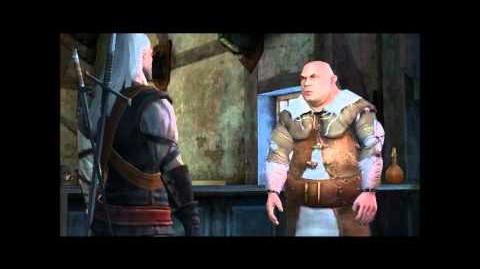