The Rose of Remembrance

The Rose of Remembrance

Triss Merigold
The Rose of Remembrance is a quest in Chapter I of The Witcher 2: Assassins of Kings.

After questioning Ciaran in the barge, Triss mentions that the roses Ciaran spoke of could help restore Geralt's memory. Geralt is given the choice of searching for the roses alone, or letting Triss come with him. Bringing Triss with you opens more 'Romance' options as well as a chance to get an ability by rejecting the former; not bringing her merely speeds up this phase of the quest. Choosing to go with Triss also means that you start on the quest immediately, while choosing to go alone lets you do other things first.:

Choosing to go it alone:[] 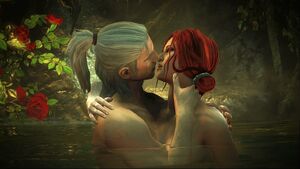 If you chose to go with Triss:

Interrogating Ciaran made Geralt feel strange. Perhaps it touched a nerve, and it certainly caused anxiety. The witcher could almost hear the memories locked away in his mind calling for freedom and battering at the door that kept them from him. Seeing the witcher's behavior, Triss decided there was no time to lose and asked Geralt to find a rose of remembrance. This powerful psychoactive agent could hasten the recovery of his memory. Geralt and Triss went off to search for the flower, or, more precisely, Geralt followed the sorceress, who knew how to reach the place where the roses apparently grew.

If you chose to go alone:

Interrogating Ciaran made Geralt feel strange. Perhaps it touched a nerve, and it certainly caused anxiety. The witcher could almost hear the memories locked away in his mind calling for freedom and battering at the door that kept them from him. Seeing the witcher's behavior, Triss decided there was no time to lose and asked Geralt to find a rose of remembrance. This powerful psychoactive agent could hasten the recovery of his memory. The witcher went off to find the rose alone, even though this irritated Triss somewhat. He didn't know where to look for the flower, but he was counting on luck and on Lobinden's residents, who knew the surrounding forests like the backs of their hands. He also knew that he always could go back and ask Triss for help.

If you asked Anezka for help:

The witcher asked Anezka about roses of remembrance. The young woman admitted that she had once had one, but not because she had picked it herself. She had received her rose from an admirer.

If you bribed Cedric for help:

After some haggling, Geralt succeeded in bribing Cedric. In exchange, he got a map indicating the location of the ruined elven gardens, as well as sites where certain herbs grew and areas haunted by monsters. Without a doubt, this information was well worth the coin the witcher had spent. Glancing at Cedric's directions, the witcher sett off to find the elusive rose.

If you chose to go alone and then changed your mind and asked Triss to go with you:

If you went with Triss:

The witcher reached the waterfall and then followed a path upwards, towards the elven ruins.
Instinct told the witcher there were roses of remembrance somewhere nearby. Indeed, Geralt soon saw the plant and could pick the flower he had seen seeking.
Out hero found a bush of roses of remembrance, leaned forward and picked what looked like an ordinary flower. "A rose is a rose is a rose is a rose," a poet once wrote, but she was wrong in regard to this one, for the flower really was the key to Geralt's memory.
The ruins' atmosphere contributed to an intimate feeling both Geralt and Triss felt, yet intruders disturbed it. A band of thugs stealing the last surviving statues appeared in the ruins. The outraged Triss provoked the plunderers and a flight ensued. Geralt had to defend both his life and that of the sorceress.
As if the bandits were not enough, the ground beneath the witcher's and the sorceress' feet caved in. The ceilings of an underground room, eroded by time, gave in and our heroes landed within. It was a beautiful bathhouse, elven-built, of course. It was still supplied in water by a clean spring! However Geralt was in no mood to admire the works of ancient masters. The witcher started looking for an exit.
You should know that Geralt and Triss had by now grown weary of missions ordered by crowned heads and of saving the world, whether in its entirety or in part, not to mention their exhaustion with pursuing secret organizations. When the witcher found the roses of remembrance, they had a long talk about private things which had until now been continuously put off. The sorceress wanted to leave it all and flee as far as possible, to keep a low profile with Geralt, somewhere away from all problems.

If the Witcher refuses Triss's offer:

The witcher, however, wanted to get Foltest's killer at all costs and didn't agree to the sorceress' proposal. The offended sorceress left[sic], while Geralt began pursuit of the kingslayer.

If the Witcher agrees with Triss:

The Witcher, however, wanted to repay his debt of gratitude to Roche, and went to speak to him.