q3043_trisshan
The Source is a quest which is given to Geralt by Triss Merigold at the beginning of Chapter III. She asks him to place three sensors at each of three locations in the Temple and Trade Quarters to locate the source of some strange magical anomalies.

At the beginning of Chapter III, Triss gives Geralt three magic sensors and asks him to place them in some reliefs located around town. They will be used to triangulate the source of some strange magical anomalies she has recently noticed. Being the obliging soul that he is, he agrees to help her and heads out to find the reliefs in the Temple Quarter, cemetery, and Trade Quarter and place the spheres in each one.

The witcher then must find Triss to let her know that the task has been accomplished. Actually, he does not really have to say much as she already knows. She tells him about a child being kept at St. Lebioda's Hospital. That child, Alvin is a source and hence the origin of the magical anomalies. Triss wants Geralt to retrieve the child and bring him to her where he can be properly supervised and trained to control his wild magical abilities, but Shani is unwilling to release him. Triss points out that Shani is Geralt's friend and that he should be the one to make her see sense.

So it is off to the hospital, but just as he enters the Temple Quarter, Shani "greets" him with a few choice comments about Triss and asks him to leave the child with her instead. (She even goes so far as to say that she does not want the sorceress to get her "dirty paws" on Alvin) Geralt then continues en route to St. Lebioda's, but instead of Alvin he finds Dandelion, who tells him he has just witnessed Alvin being dragged away, kicking and screaming by some Salamandra types. He boasts that he followed them and found out where they have taken the boy, and that he can show the witcher the exact location. He then runs off to do just that, forcing the witcher to follow.

They leave the hospital and head for Little Mahakam, to a previously locked door across the street and just west of the dwarven blacksmith shop. There Dandelion pauses and asserts that he wants to actually help this time - he is devising a whole new genre: the pro-active ballad. Geralt points out that this would not be the wisest move, so the bard reluctantly agrees to "sacrifice" himself and stay outside while the professional deals with the bad guys. Geralt then enters the building, mercifully unaided by the bard.

Inside, there are a few assassins guarding the child. He kills them with his usual speed and finds Alvin. Dandelion then enters and Geralt tells him to take the child to either Triss or Shani which Dandelion does. Just then, a few more assassins enter only to be dispatched with equal speed. The witcher then exits the building and heads off to visit Shani, or Triss depending on his choice of guardian for Alvin:

Having chosen Shani, Geralt goes to her house to have a chat and make sure Alvin is all right. She asks him to confront Triss and tell the sorceress that he decided to leave the child with her. As he tries to leave, Dandelion shows up and drags him to a drink-fest with Zoltan Chivay in the back room at the Hairy Bear Inn. The beer fest includes a discussion delving into the witcher's motivations. In the end, Dandelion suggests going to the House of the Queen of the Night and Geralt must once again make a choice, but luckily not one of any real consequence. The witcher is then dumped on Shani's doorstep, drunk. He can sleep things off at her place after an amusing little exchange.

Having chosen Triss, Geralt goes to her house, during the daytime, to speak with her. She, like Shani, asks him to go to the other woman and inform her that Alvin will be safer with someone who knows about magic. The witcher replies that he would rather face a swarm of Ghouls but agrees to the plan in the end. As he goes to leave, Dandelion shows up, and drags him off to The New Narakort for exactly the same drink-fest described in the Shani branch (substituting Triss for Shani whenever logical in the conversation) and it ends with our hero unceremoniously dumped on Triss' doorstep, drunk. His exchange with her about his state is less funny than the one with Shani. It appears that the sorceress is far more concerned with what the neighbours will think.

Geralt then heads off to tell Triss the "good news", which does not go over very well at all. Thereafter he will forever be greeted by the sorceress with "Speak, then get out of my sight!"

Geralt then heads off to tell Shani that Alvin is staying with Triss. She is not very happy, to put it mildly. Any further attempts at dialogue with her will result in her telling the witcher that he is no longer welcome at her place and that she plans to wipe his name from her memory.

He then heads back to whichever house Alvin is actually staying at. Now about Alvin...

Shani mentions that a silver amber ring would work nicely as proof of Geralt's affections, but she could not accept such a ring until after he has "bonded" with Alvin. For this, he might need some candy, or he may have to promise the boy a dog, show him to swordfight, or tell him he can do as he pleases when he is older. Basically indulge him, whatever the request.

Triss wants a silver ruby ring (or possibly any ring with a ruby) or a Gold ruby signet ring (in EE) which she would consider a pledge. Like Shani, she will not accept it right away and will want the witcher to show Alvin some discipline. This is easy, deny him whatever he wants.

Having satisfied his new-found "fatherly" duties, he is ready for some "quality" time:

Once Alvin's happy, Geralt returns to Shani, gives her the ring and gets his second roll in the hay with her.

Once Alvin has been "disciplined", Geralt returns to Triss for his second official (but third overall) encounter with her - she did check him for internal injuries when he woke up after the boss battle in the swamp.

The quest's ending finalises Geralt's romantic choice and his guardianship of Alvin.

Triss Merigold is examining some magic anomalies. She said something about me helping her. I should ask her what she meant. I should offer to help Triss.

Triss Merigold asked me to set three magic sensors in three places in Vizima: in the Trade Quarter near Town Hall, in the Temple Quarter by the entrance to the sewers and at the cemetery. Triss claims the anomalies are causing more monsters to appear in Vizima. The sensors should help us discover the source of these anomalies. I have to place the three magic sensors: one near Town Hall, another near the sewer entrance and the third at the cemetery.

When I left Triss's [sic], I ran into Shani. She claims Triss has dubious intentions towards the child. She asked me to bring the child to her. The boy is at St. Lebioda's Hospital. Shani wants me to take the child from the hospital and bring him to her. 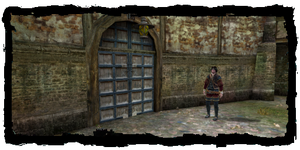 Alvin For Shani or Alvin And Triss[]

I asked Dandelion to take Alvin to Shani's. I should talk to her, see how they're doing. I should see Shani.

I asked Dandelion to take Alvin to Triss. I should talk to her, see how they're doing. I should see Triss.

Triss was happy to hear I found the boy. She asked me to explain to Shani that she was going to keep him at her place. I should tell Shani that Alvin's staying with Triss. Shani should be home. (4000 XP)

If Triss was chosen:
Shani was furious when she learned what I decided to do with Alvin. Things between us will never be the same again. I was wise to choose Triss. Time to see Triss again. 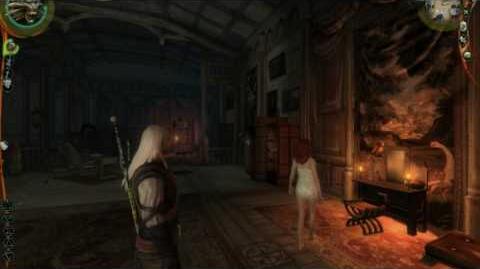 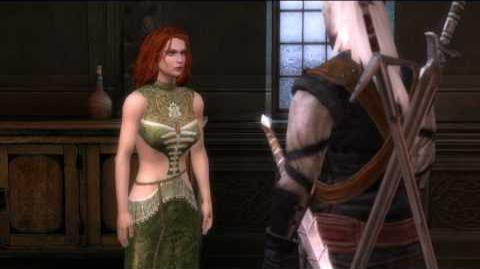