Following the Thread
Lock and Key
Diplomacy and Hunting

The Viziman Connection is a quest in Chapter III given by Jethro to Geralt after the latter has cleared out the Salamandra hideout in the sewers.

After slogging his way through the fisstech lab for Jethro, Geralt emerges from the crypt only to be greeted by the guard who is once again barking orders. This time the witcher has had enough and tells the jailer so in no uncertain terms, but concedes that he will still help, given that Jethro is in no shape to finish the job due to his "little habit".

The guard tells the witcher that Gellert, the drug lord, is not far away and should be "taken care of" without delay, marking the spot on the map and then heads back to the dungeon. Geralt, on the other hand, heads off to find Bleinheim who is in an area in the southern section of the sewers which had previously been inaccessible due to a locked iron gate. (This is the gate which is opposite the nook where the dead knight with the key to the Lionhead Spider Cultists' lair was found).

He proceeds through the gate and keeps bearing south until he spies a bunch of Salamanders, including Gellert Bleinheim. No sooner has he seen them, than they see him and as usual swordplay (and maybe the casting of a few signs - for fun) ensues. It seems the closer the witcher gets to his goal, the better armed his adversaries are, but in the end, he prevails (did you ever doubt it?).

He searches the bodies collecting what loot he finds interesting until he finds Gellert Bleinheim's dead body. On that corpse, he finds the same weapons as he found on Roland Bleinheim in the swamp: an illegal sword and an assassin's dagger; and two letters: the Royal letter of safe conduct, identical to the one his brother had, and the key to the Salamandra code. Then he goes to find Jethro at his usual post, the dungeon, and report that the mission has been accomplished. One dead drug lord, as requested.

Deliveries in the Sewer

Gellert proved a strong and aggressive opponent. He seemed to be protecting something, desperately. I must search the bandit's corpse.

Jethro paid me for dismantling the Salamandra cell in the Temple Quarter. Job done. I should review Leuvaarden's clues. I need a break, a new lead. I need a new lead. Where do I look? (200 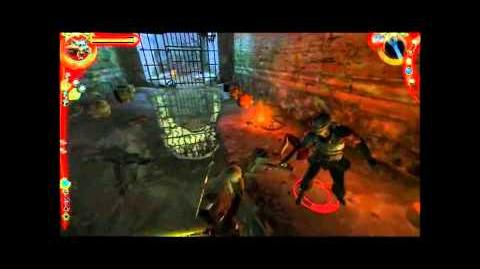 Retrieved from "https://witcher.fandom.com/wiki/The_Viziman_Connection?oldid=463775"
Community content is available under CC-BY-SA unless otherwise noted.