One on One: Vergen
The War Council is a quest in Chapter II of The Witcher 2: Assassins of Kings.

The War Council is a meeting of the leaders of Vergen called by Saskia to discuss the impending battle with the Kaedwenis camped across the river. In attendance are Cecil Burdon, Zoltan Chivay, Yarpen Zigrin, Prince Stennis, Geralt and a few of the nobles.

The relative disparity in the number of fighting men available is discussed. Aedirn has about 200 dwarves, roughly 500 peasants, 53 knights with 200 armed men, and as Saskia reveals, 100 elite elven archers, to be led by Iorveth who will face Henselt's trained army of 5000 making it about a 5:1 ratio in favour of Kaedwen.

After reaching Vergen, Saskia and Stennis left Geralt to his own devices. The elder, Cecil Burdon, greeted the witcher. It turned out that because of the Kaedweni threat, the gates will be closed. A debate was to be held, where all attendees would discuss how to end that threat. The witcher was invited too, but at the moment he could rest in a room at he local inn provided for him. Following Burdon's nephew to the inn, our hero thought deeply about Upper Aedirn's situation.
In spite of its dwarven standards, Geralt's room at The Cauldron proved quite cozy. The witcher settled in and, once ready, ventured out to attend the war council.
My, was that ever a debate. Those attending discussed how best to repel Henselt. There were as many positions and proposals as there were debaters and disputants. Luckily, the witcher's task was simple – to life the curse from the battlefield with Philippa Eilhart's help, thus getting rid of the ghastly mist and allowing the armies to move against one another. The witcher would have started right away, glad to leave the debaters spewing words and spittle, but a tragedy occurred – Saskia was poisoned. The dying girl was moved to her house, while Geralt, Iorveth and Cecil went to its door to await news. When only Philippa emerged, the witcher began questioning her about the Dragonslayer's condition.
And Saskia's condition was bad, and still deteriorating. The witcher not only had to find a way to life the curse from the battlefield, but also get an anitdote for the poison coursing through Saskia's veins as fast as possible. 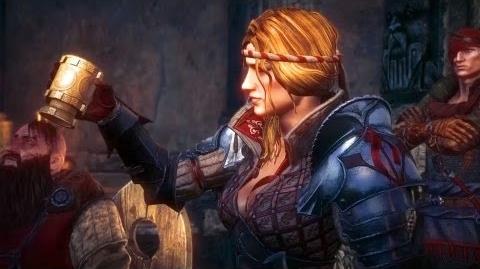