At the 2008 Game Developers Conference in San Francisco, CD PROJEKT RED announced an enhanced edition of The Witcher, which contained a great number of technical upgrades, as well as a lot of new features.

The Witcher: Enhanced Edition was released on September 16, 2008. The game updates, as well as the box extras, are available as a download free of charge for owners of the original version who have registered their game on the official forum. Patch 1.4 itself is made up of four files:

The significant changes featured in the enhanced version are over 200 new animations, additional NPC models and recoloring of generic NPC models as well as monsters, vastly expanded and corrected dialogues in translated versions, improved stability, and load times reduced by roughly 80%. In addition all bugs are said to be fixed and the game manual completely overhauled. A new option is to mix and match 8 different languages of voice and subtitles. For instance, players can now choose to play the game with Polish voices and English subtitles.

In addition to the game enhancements, the boxed edition of The Witcher: Enhanced Edition contains a "making of" DVD, a CD with 29 official in-game music tracks and the official game strategy guide. The non-North American version also included a second CD with music "Inspired by" The Witcher, a bound copy of the short story "The Witcher" by Andrzej Sapkowski from the book The Last Wish, a map of Temeria printed on high quality paper, and an overhauled game manual. 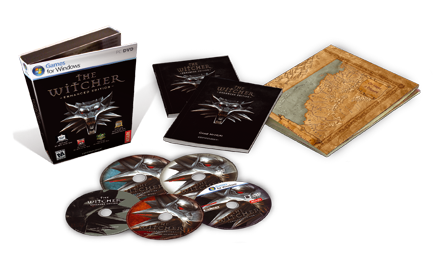