The Witcher: Fox Children
The Witcher: Matters of Conscience
The Witcher: Killing Monsters is a special graphic novel from the series, The Witcher. The comic book was published by Dark Horse Comics on May 19th 2015, and was available with the pre-order of The Witcher 3: Wild Hunt in some regions. It was later re-released in 2016 with the Blood and Wine expansion. It's written by Paul Tobin and the cover illustrated by Joe Querio.

The coloration was done by Carlos Badilla as with most of the other parts of this series. Previously, the art of the other volumes were drawn by Max Bertolini.

The plot is set before the events shown in the Killing Monsters cinematic trailer. In the comics, Vesemir and Geralt are looking for Yennefer. In the small town of Vorune, occupied by troops of Nilfgaard, they are looking for work and take a contract for 40 Florens to kill a man-eating monster. A Fiend called Drugan no less. But the giant beast is not the only murderer in this region... 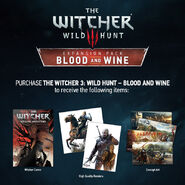