The comic was released digital only in October 2015, together with the Hearts of Stone expansion. It is written by Michał Gałek, illustrated by Arkadiusz Klimek, and colored by Nikodem Cabała.

Those that registered a copy of the third game on GOG.com or Steam can download a free English or Polish version of this comic.

Description of closer time frame and actions is explained in the introductional text, written by Dandelion.

The year was 1271. The place - Vergen. The moment - portentous. King Henselt's long siege had finally ended. Life was slowly retunring to normal - or as "normal" as it could be in a city where humans, dwarves and elves lived side by side an din harmony, the whole powder keg led by a maiden... And not just any maiden, mind you, but the virgin and heroine Saskia, until recently known as the Dragonslayer, before she was revealed to be a dragon herself. Her true name was Saesenthessis, a name of some beauty. As to her true form... well, none could say, for she was of the rare breed endowed with the gift of polymorphy and could thus change her appearance as easily as others change stockings.
As was to be expected, Vergen's residents had mixed feelings when the curtain was lifted on this secret. True, they owed much to the Virgin of Aedirn, but was it enough to swear fealty to a dragon? Many abandoned the city, and those who stayed watched Saskia's every doing the way sheep might eye a wolf clad in wool.
As a final dash to this already seething stew, a problem had bubbled up in the nearby bogs. A problem requiring a witcher's attention. And so Geralt of Rivia returned to Upper Aedirn shortly after his final confrontation with the assassins of kings, Letho of Gulet, for the last time. His task now was to hunt down and slay the... well, the beast in the bogs, which went by various names. To the witcher it was a chelonodrake, to the common folk it was a tortodragon, and to the dwarves it was a minge-mawed, armor-plated son of a scabby bitch. Whatever the beast's name, its tale played out thus...

Cover of the Polish edition. 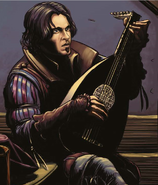 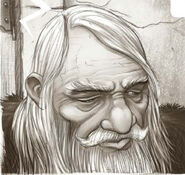 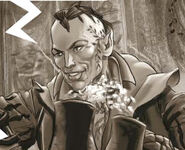 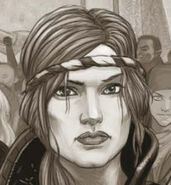