Edit
watch 01:28
The Witcher 2 - Assassins of Kings Official Trailer
Do you like this video?
Play Sound

See System Requirements section.
The Witcher 2: Assassins of Kings is a sequel to The Witcher, developed by CD PROJEKT RED and released on May 17, 2011. Like the original game, it is set after the events of Andrzej Sapkowski's The Witcher series of novels on which the games are based.

Announcements prior to release[]

A video showing Assassins of Kings was leaked on 16 September 2009, before the game was officially announced. According to CD PROJEKT RED, the video was intended for potential publishers, and had been created about six months before it was leaked. It was made using a "very early alpha version" of the game, and voices were provided by CD PROJEKT RED staff members rather than the final actors. CD PROJEKT RED published a short FAQ in response to the leak, but said that apart from that, they did "not plan any materials to be released soon". The game itself was said to be "still deeply in the development stage", and people should "not expect the game too soon".

The game was announced officially on 24 March 2010, with a number of articles and videos appearing. A two-minute trailer was released on GameTrailers, and articles (with accompanying video and screenshots) have been released in English, Polish, and Russian.

The official CDPR forum was launched on March 23, 2010 along with the official trailer. An official website followed in April.

If the Dark Version is purchased, included with the game is a Making Of DVD, the game's soundtrack on CD, a world map, a Witcher medallion, a quest handbook, the game manual, an art book, stickers and a special box to hold everything in. The Enhanced Edition includes the game, the soundtrack, the world map, the quest handbook, and the manual.

For the main article, see The Witcher 2 storyline. 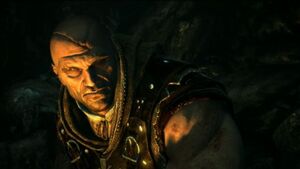 The plot of The Witcher 2 is intended to be less linear than that of the first game, and is supposed to feature "three independent plot lines" which lead to multiple endings.[1]

The Witcher 2 is set almost immediately after the first, and follows from the attempt on King Foltest's life which occurred in the final cutscene[1]. Geralt will once again face the mysterious witcher-like assassins, who appear to be connected with a character named in previews as the Kingslayer.[2] In a trailer, the Kingslayer is seen speaking to Iorveth, a human-hating elf. The Kingslayer displays a head which he claims belonged to King Demavend of Aedirn, and says that if Iorveth is prepared to help, more kings will also fall.

Other plot elements which have been referenced (but which do not necessarily correspond to the three plot lines mentioned) are Foltest's moves to capture the stronghold of the rebellious Baroness La Valette and "Geralt's personal theme, in which he's looking for his own identity".[1]

According to a fact sheet released for the game, Geralt's travels "will lead him up the river Pontar into the turbulent borderland between Temeria, Kaedwen and Aedirn".[1] A town named Flotsam, situated on the border between Temeria and Aedirn, will feature. 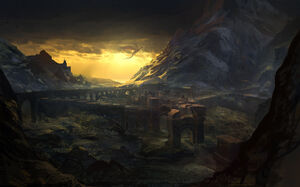 Characters returning from the first game include Triss Merigold, Zoltan, and Dandelion. A new character to be introduced is Vernon Roche, a member of the Temerian military who has been sent to help Geralt.

The narrative takes Geralt from Foltest's side, through an assault on La Valette Castle, then through Flotsam, Aedirn (either the dwarven town of Vergen or a Kaedweni camp depending on his alliances) and finally to Loc Muinne where he has a final face off with a dragon. 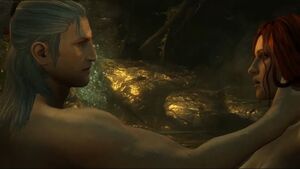 A small segment of the game's early stages was covered in some detail by previews and videos,[2] apparently having been used as a demonstration for the media.

The segment begins with Geralt, Triss, and Roche on a ship, on the Pontar river. They disembark and head into a forest, with Triss and Roche arguing. They are interrupted by the sound of someone playing a flute, and notice Iorveth watching them. Roche and Iorveth know each other, at least by reputation, and are hostile. A fight begins, with Iorveth signalling archers to attack — Triss is able to establish a shield to protect them (also seen in the trailer), but is weakened by the effort, and needs to be carried by Roche. The shield renders Iorveth's archers useless, but enemies can still pass through the shield on foot, and Geralt must hold them off alone while the three slowly make their way to the safety of the nearby village (Flotsam).

Later, the three are admitted to the town of Flotsam, where they find a public hanging in progress. Two of the four people waiting on the gallows are Dandelion and Zoltan, the latter of whom turns out to be an informant that Roche was looking for. Geralt moves to save them, arguing with the guards (with some support from the townspeople) and then fighting them. The town's leader (Bernard Loredo) then arrives and speaks with Geralt — the two unnamed prisoners are hanged, but Dandelion and Zoltan are spared, with the town official telling Geralt to speak with him later to hear a proposal.

Geralt can later visit a nearby elven ruin. This involves fighting their way through a stretch of forest, and then fighting looters at the ruins. Triss can accompany him, and when they find themselves trapped after a fall, there is an opportunity for a love scene (the one depicted in the trailer).

Later still, Geralt accepts the quest to fight the kayran.

For the main article, see The Witcher 2 soundtrack.

The soundtrack for The Witcher 2: Assassins of Kings computer game was composed by Adam Skorupa and Krzysztof Wierzynkiewicz. The soundtrack CD is included with the game. It consists of 23 tracks with the total running time of approximately 73 minutes 1 second. Four additional tracks were released through GOG.com. The 43-track version is also available for free download on the CD PROJEKT RED website. 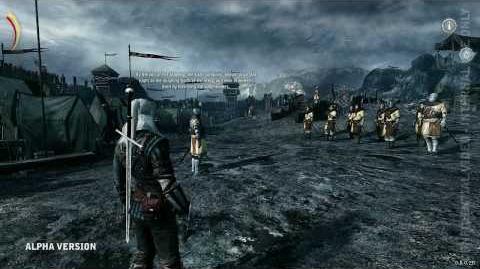