This article will catalogue Easter eggs in The Witcher 2: Assassins of Kings. The developers have stated that there are a fair number of them.

A virtual Easter egg is an intentional hidden message or feature in an object such as a movie, book, CD, DVD, computer program, or video game. The term draws a parallel with the custom of the Easter egg hunt observed in many western nations.
This practice is analogous to hidden signature motifs such as Diego Rivera including himself in his murals or Alfred Hitchcock's legendary cameo appearances. (Wikipedia)

References to Other Games/Media[edit | edit source]

"Iorveth: One ring to rule them all, and in the darkness bind them...

Geralt: And then I'd have to run barefoot to a volcano..." 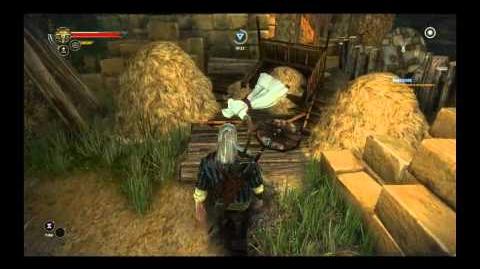 Tw2 video eastereggassassinscreed
Add a photo to this gallery
Retrieved from "https://witcher.fandom.com/wiki/The_Witcher_2_Easter_eggs?oldid=535423"
Community content is available under CC-BY-SA unless otherwise noted.