View source
watch 01:14
Game Recap: The Witcher 3: Wild Hunt: Guide to Romance
Do you like this video?
Play Sound

The purpose of this guide is to maximize your chances for romantic encounters in The Witcher 3: Wild Hunt. Some of the characters Geralt gets to bed are true romantic interests, while others are just casual partners. Either way, in order to end up in bed with your chosen partner, you'll have to seduce them. This will be done through gifts, sweet talking and similar actions. In this Witcher 3 romance guide, we're going to list all the characters we find you can have sex with, as well as the conditions for having it.

While adventuring, Geralt of Rivia has more than one opportunity to polish more than his steel sword for an evening. There are a number of women that can be wooed into a night of passion. But how many? Who? And where? Glad you asked. The following are the times, quests (where appropriate), and ladies you can spend a romantic evening, or a rutting session, with. Any stipulations are listed in their appropriate quests.[1] 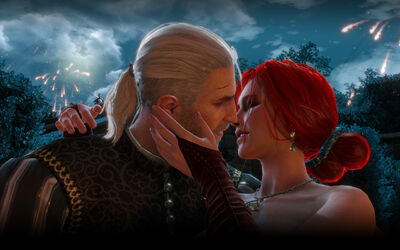 Those who've played the previous games are already familiar with Triss – she has starred in both of the former games, and has been available for romance in both, too. Once again, she can be a romantic interest if you choose so. You need to finish her side quest – Now or Never, after you've done the main quest A Favor for Radovid, as well as the secondary quest A Matter of Life and Death.

During A Matter of Life and Death, you need to kiss Triss at the masquerade. When you start Now or Never, go and defend the mages. When you're at the docks near the end, Triss is resolved to leave for Kovir with the other sorcerers. Geralt can ask her to stay, telling her that they can try to make their relationship work, or he can truly pour his heart out and tell her that he loves her. She then boards the boat, but (if Geralt said he loves her and only then) comes back for you. You then have sex at a lighthouse.

If, during the missions A Matter of Life and Death and Now or Never, Geralt romances Triss, tells her he loves her, and avoids romancing Yennefer later in the game, he will end his story with Triss. The couple move north to Kovir, where Merigold earns a handsome living as an advisor to the king, and Geralt takes on the occasional Witcher Contract to keep his skills honed. 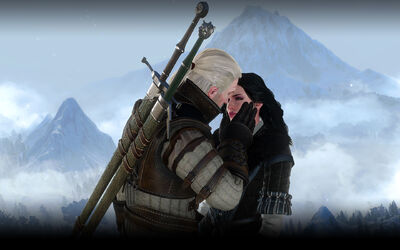 Yennefer is the closest we'll see of Geralt's true love. You will get a chance to sleep with her twice during the game. For the first time to happen, you need to finish the The King is Dead – Long Live the King quest. When choosing your outfit, go for the black and white one. After you've killed the earth elemental in the laboratory, the room will start filling up with gas. Choose the option to kiss her during the conversation, and she'll teleport you to safety – safety being her bedroom. Now you just need to ask her to let you watch.

The second encounter happens during the No Place Like Home main quest. After the dinner, when Yennefer goes up to her room, you can come along with her, provided you've already been intimate.

If Geralt avoids romancing Triss Merigold and instead attempts to woo Yennefer during the mission The Last Wish, the Witcher and the Sorceress will retire together - far from the noise and danger of politics and adventure.

Why not both of them?

For the main quest, see It Takes Three to Tango. 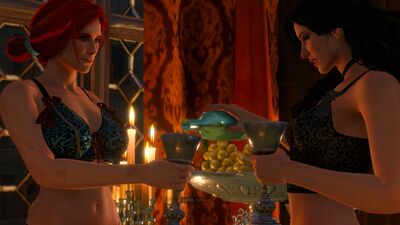 If you attempt to equally romance both Triss and Yennefer throughout the game you will lose both. Later in the game, after helping Triss and Yennefer in Novigrad before the search for the Sunstone they will attempt to seduce Geralt together, suggesting he can have both of them. Instead they leave Geralt at the Kingfisher Inn alone and chained to a bed naked, and Dandelion has to rescue him.

Any further conversation with Yennefer or Triss on the subject of romance will end with them simply saying that they want nothing to do with you in that area, and their futures do not include Geralt of Rivia. You will have failed both romances if you attempt both at the same time.

Note that pursuing any of the other romance options listed below will not result in any backlash from either Triss Merigold or Yennefer and will not affect any of the romance endings Geralt can receive.

After completing the main story quests Hunting a Witch and Wandering in the Dark, Keira Metz will invite Geralt to her home. If he accepts the invitation, he will need to complete the quest A Towerful of Mice, helping her lift a curse on a nearby island. After this quest is finished, she will ask for one last Favor for a Friend. If the Witcher agrees to help track down her missing parcels - which turn out to be ingredients for a fanciful meal - Keira will invite Geralt to join her for an enchanted moonlit feast.

In exchange for taking part in a Gwent tourney, Geralt may spend a night of passion with Madame Sasha. To romance her, he must enter the card tournament in the High Stakes quest and either beat her or agree to help her. Afterwards she will ask you to dinner and you simply agree.

During the Iron Maiden secondary quest, Geralt may romance the lovely Skelliger, Jutta. To engage in a romantic encounter with her, simply beat her in sword duel without cheating and then follow up with a visit.

During the Hearts of Stone expansion, Geralt can romance his old acquaintance Shani after attending a wedding feast. In order to lift Shani's spirits, Geralt must bring her a gift at the end of the Dead Man's Party quest. You can experience a humorous love scene if you decide to bring either mead or brandy to Shani's table instead of flowers (and allow her to mix liquor with wine). If he picks a flower, things end better.

During his quest in the Blood and Wine expansion, Geralt has an opportunity to romance Sylvia Anna after successfully guiding her out of the Lands of the Thousand Fables. If he agrees to the proposition, they make love in a very unusual way.

Note that employing the services of either establishment listed below will never result in any backlash from either Triss or Yennefer and will not affect any of the romance endings Geralt can receive.

Don't let the name fool you - Crippled Kate's is home to some of the finest ladies north of the Pontar river. Despite what the name suggests, Kate's girls aren't crippled... unless you're into that. Geralt's choices are:

Hailed as one of the finest establishments in all Novigrad, the Passiflora is run by its madame Marquise Serenity and caters to any and all appetites. There are three of them:

Courtesans of The Belles of Beauclair

Located in Beauclair, the capital city of Toussaint, The Belles of Beauclair is a brothel run by Madame Isabelle which hosts three courtesans: