Witcher Wiki
Register
Don't have an account?
Sign In
Advertisement
in: The Witcher combat, The Witcher (computer game)
English

Character statistics are the most important way to gauge the overall health of our hero. Whether Geralt lives or dies is governed by his Vitality, but Endurance and Toxicity play their parts. 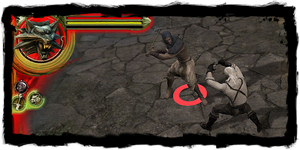 Vitality (sometimes referred to as "hit points"), indicated by the red bar, drops as damage is incurred. If the red bar reaches zero, Geralt dies. A grey screen and (very) audible heart beats warn you of dangerously low vitality. 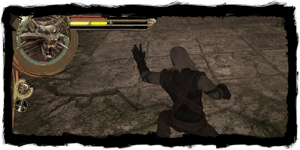 Geralt's endurance, indicated by the yellow bar, drops each time he uses a sign. He can not cast signs when his endurance is too low. In fistfights, blocking also siphons Geralt's endurance; reaching zero, Geralt can not block.

Endurance is restored over time. Use potions to help with its regeneration. 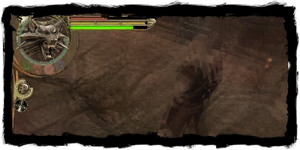 Toxicity, indicated by the green bar, increases with each potion consumed. Excessive toxicity adversely affects Geralt's abilities and may even lead to his demise. When toxicity is reaching a dangerous level, "red sparkles" (blood) begin to appear in the field of view, like Geralt is beginning to hallucinate. This is generally a very good indication that it is time to detox.

When toxicity exceeds a certain threshold (around 60-70), Geralt will lose a sizeable portion of his vitality after drinking a potion. When toxicity nears 90, he will be unable to run. If toxicity ever reaches 100, Geralt will die on the spot.

Toxicity is reduced over time, very gradually though.