Witcher Wiki
Register
Don't have an account?
Sign In
Advertisement
in: The Witcher combat, The Witcher mini-games
English 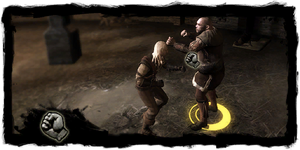 Fistfighting is a skill which is not only useful for self-defense and a bit of exercise, but also for earning orens. In The Witcher, you can earn some easy gold by challenging the steady crop of fighters found loitering at all the local inns and taverns to fights.

There are "title fights", where you work your way up in fame through the Fistfight quest and win more than just gold, as well as any number of non-title matches which are strictly for cash. Just click on the potential opponent as you would to speak to any other game character, negotiate your wager and commence fighting.

Do not get excited. You can only wager on your own fights. It might be fun to speculate on the outcome of other fistfights, but that is not part of this game.

When making a wager, it is always good to maximize your potential winnings (since winning is pretty much a given, see Fistfighting made easy). "Title" fighters will not negotiate their wagers, but you can bet between the following amounts of money for generic fighters:

To initiate the fight, click on the Fistfight icon during dialogue: