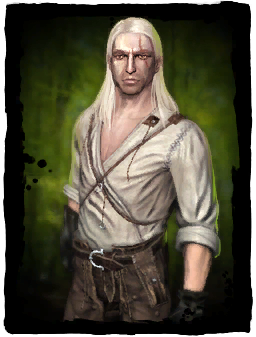 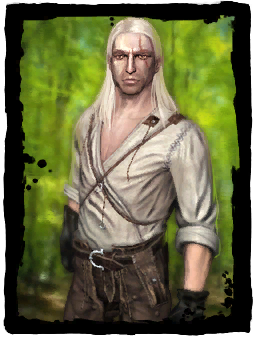 For Novice gamers. Combat is easier. Alchemy is not required to survive.
Easy
No Critical hits on PC 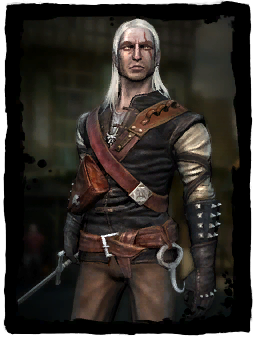 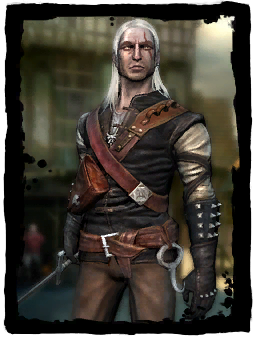 Intermediate level is recommended for most gamers. Combat is challenging. Alchemy is useful.
Medium
No Critical hits on PC 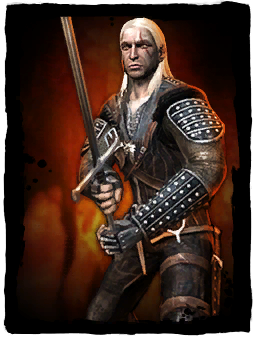 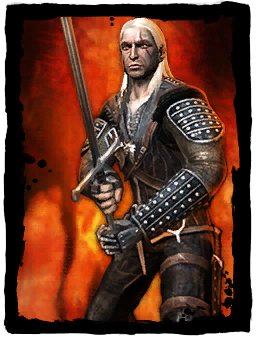 For advanced gamers. Combat is difficult. Alchemy is required to survive.
Hard
No Critical hits on PC

The game can be played from either an over the shoulder (OTS) or one of two isometric perspectives. The OTS perspective was designed for exploration and questing, whereas the isometric perspectives were designed to give a better tactical view in combat. Many players stay in OTS mode all the time as Geralt almost always fights solo and this view mode, in addition to being more immersive, gives a more cinematic experience in combat.

Here are screenshots of the three view modes (isometric mode can either be close to Geralt or a bit further away).

Over the Shoulder (OTS) view

Unlike most computer role playing games, in The Witcher players do not get to create their own characters, but instead take the role of Geralt, the character from Andrzej Sapkowski's Witcher series of books. However, Geralt's skills can be developed throughout the game in various ways.

As Geralt proceeds about his various quests, he acquires bronze, silver and ultimately gold talents which can then be allocated to enhance his Attributes, Signs, Steel and Silver sword skills. Attributes include:

The five magical signs are: Aard, Axii, Igni, Quen and Yrden. There are also three fighting styles: strong, fast and group, for both sword types.

For the main article, see The Witcher inventory.

This inventory is quite different from most RPG orientated games. Because it does not allow you to store any weapons, armor or other overly large random items. Instead, it revolves around the fact that you carry a satchel in which you can merely place smaller odds and ends like potion ingredients, food, drinks, books, scrolls, etc... and also just a limited number of these items, though that limit is reasonably large.

The inventory is divided up in general sections each consisting of small compartments, or slots in which a single item can be stored. They are:

For the main article, see The Witcher journal.

The in-game journal tracks information from a variety of sources. As Geralt learns about formulae, monsters, characters, places and so on, new journal entries are added for future reference. Some of these entries contain clues to help devise an effective strategy, for example detailing a monster's strengths and weaknesses.

The quest portion of the journal tracks Geralt's progress as he takes on and progresses through the many quests in game. Quests can be broken into subsections based on which Chapter they occur in, whether they are active or not, and the current phase of multi-part quests can be selected as well. To aid the player there is also an option to track the selected quest, which puts a marker on the in-game map and provides a directional arrow to the next objective in the mini-map.

For the main article, see The Witcher weapons.

For the main article, see The Witcher armor.

The combat system in The Witcher represents a departure from most RPGs. Players choose one of three fighting styles. The quick style allows for faster, less-damaging attacks with a greater chance of hitting faster enemies; the heavy style deals more damage in exchange for a slow attack speed, and a lower chance to hit faster enemies; and the group style, which features sweeping attacks best used if the player is surrounded.

Each of these stances has its own unique combat style. Both of Geralt's main swords — the steel and silver ones — have distinctively different combat styles from the rest of weaponry, and serve very distinct purposes: where the steel blade is used to fight humans and other flesh-and-blood beings, the silver one is more effective against supernatural monsters and beasts (against some of which steel may have no effect whatsoever).

For the main article, see The Witcher alchemy.

Alchemy is a major part of gameplay. The player can create potions that increase health or endurance regeneration, allow Geralt to see in the dark, or provide other beneficial effects. The recipes for these potions can be learned through scrolls, or by experimentation. Once the player creates an unknown potion he can choose to drink it, but if the potion is a failure it will poison the character. Each time Geralt drinks potions they increase the toxicity level of his body. This can be reduced by drinking a special potion or by meditating at an inn or fireplace.

In addition to potions, the player can also create oils and bombs, respectively used to augment the damage done by weapons, or as weapons in combat. Neither can be created until talent points have been allocated into the corresponding skills.

For the main article, see The Witcher character interaction.

As Geralt explores Vizima, he meets a huge variety of characters, many of whom have quite a bit to say. Some of them also offer services or opportunities to explore activities beyond simple dialogue. These options are explored through the use of character interaction icons.

The above icons all appear during dialogue sequences with other game characters. They allow Geralt to interact with the various game characters he meets along his Path.

For the main article, see The Witcher decision checklist.

An innovative, time delayed decision-consequence system means that the repercussions of players decisions will make themselves apparent up to 10 –15 hours later in the game. This prompts the players to put more critical thinking into making each decision, and circumvents a save-reload approach to decision making. It also allows the game to have a unique approach to replay value, as the consequences resulting from the player's decisions can lead to great difference in the events that take place later, and ultimately a very different gameplay experience than in the prior play-throughs.

The nature of the options faced when playing the game rarely falls into the typical black-and-white morality present in most regular computer RPGs, and the players often find themselves choosing from the lesser of two evils rather than making a clear choice between good and evil, a situation more reflective of real-life morality.

For the main article, see The Witcher controls.

In the game, the player will usually use a combination of both the mouse and keyboard commands. Using one or the other exclusively is nearly impossible.

Differences between localized versions of the game[]

Regardless of version, the aforementioned creatures, and Triss Merigold in her field outfit, have breasts that move, or jiggle, as the creature or character moves, though this movement is rather exaggerated and might remind the observer of a popular food gelatin.