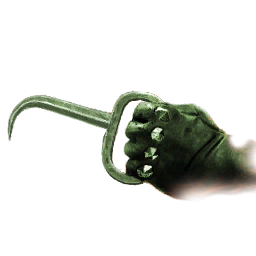 Trophy quests begin when a head is removed from an exceptional monster's remains. There are ten of these quests in The Witcher, two in each chapter. They are all secondary, although completing the main plot will require beginning (not necessarily completing) The Beast of the Sewers.

Trophy heads can be redeemed whenever Geralt has access to the current chapter's "trophy official" (these are noted by chapter below). However, since you can only carry one at a time, turning them in as you get them is more efficient. (Up to patch 1.4, trophy heads could be stored at inns. It has been reported that since that patch, it may be possible.)

The target of a trophy quest is usually larger than others of its kind, but is primarily set apart by having a specific name.

Trophy heads do not seem to despawn if you drop them.

For a dedicated trophy-hunter, there are occasional rewards beyond the money and experience. Note that when the third/fifth/tenth trophy is turned in, the bonus is given the next time Geralt speaks with a "trophy official".

Third trophy: After three trophy heads have been handed in, Geralt receives a Svarog temporary rune.

Fifth trophy: There is also a reward after five heads have been redeemed — a Perun temporary rune.

Tenth trophy: Finally, there is the ultimate reward for handing in all ten trophies - a choice between two splendid swords: the Moon Blade (silver) or G'valchir (steel).

Chapter I (Outskirts of Vizima)[]

The Royal huntsman will mention these two. He can be found camping, just past the first two abandoned huts west of the Outskirts Inn.

Vincent Meis assumes the Royal Huntsman's trophy-exchange duties. His post is just outside the dungeon near the Gate to the Trade Quarter - though while waiting for the cockatrice's head he will be in the dungeon proper, and at night he is nowhere to be found...

The Royal huntsman is back, now found just outside the cemetery gate in the Trade Quarter (just south of the guardhouse's upper floor), but his role remains the same.

Tobias Hoffman can be found during business hours at his home in the village of Murky Waters. He will tip you off to the existence of two monsters haunting the nearby fields.

The Royal huntsman is in the druids' cave during this chapter; he will mention two pesky critters haunting the swamp cemetery.