The Wraith from the Painting

Heals using her paintings
Wraith from the Painting is what remains of Iris von Everec in the world of the living.

Quite often a wraith is tied to an object, something it clung to during life, or a location, such as its place of death. In either case, we are dealing with the same causal agent: a strong emotional tie from which the wraith draws strength.
– Inigo Swann, "Beyond the Natural World."
While wandering the von Everecs' abandoned estate, Geralt came into contact with a woman's wraith haunting the house. The restless spirit had mastery over the house's furnishings and in particular over the paintings hanging from its walls. It moved freely between their canvasses, entering one and exiting through another. At first it tried to scare Geralt into giving up his search, then, when it was clear this strategy would not work, it attacked him directly.
Geralt's battle against the wraith proved very difficult, for it was fueled by rage and launched its attacks with heated aggression. Geralt was forced to move with lightning speed in order to parry its blows, without time to take a breath or launch an attack of his own. What's more, the wraith had created a bond with the paintings around it and, until the witcher severed this tie, it would continually regain any lost strength.
The key to victory over the Wraith from the Painting was to focus on parrying its blows and only attack sporadically, at exactly the right moments. Any attempt to attack in a flurry was always punished with a deadly counterattack. 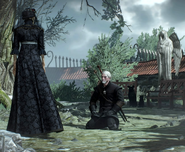 Add a photo to this gallery
Retrieved from "https://witcher.fandom.com/wiki/The_Wraith_from_the_Painting?oldid=527908"
Community content is available under CC-BY-SA unless otherwise noted.