Magic dust
The Three Little Pigs are anthropomorphic creatures that reside together in the Land of a Thousand Fables.

The Three Little Pigs were originally created by Artorius Vigo, as part of the Fablesphere, an illusory realm intended to serve as entertainment for Anna Henrietta and Syanna when they were children. However, over time, the Pigs ceased to be docile fairy tale characters and transformed into hostile beasts as the spells supporting the Fablesphere became unstable in the absence of Artorius Vigo's supervision.

The Three Little Pigs are encountered by Geralt and Syanna in the Fablesphere. They reside in a small, red-brick house. Geralt, the White Wolf, must obtain the blue, magic bean harbored within that house, so he uses the Aard sign to blow it down. The Pigs become hostile and Geralt is forced to kill them.

In combat, the Pigs behave very similarly to wild boars, trying to knock down their opponents by using charging attacks, which can be avoided by dodging or rolling out of the way. Despite their magical nature, the Pigs are vulnerable to steel coated in beast oil.

Why bother with brick? In this climate, even a straw house's nice and cozy.
– a little pig

The three little pigs are perfect examples of a rather unfortunate phenomenon. Leave even a kind-hearted, warm, naively benign creature to fend for itself, and it won't remain so benign for long.
The three little pigs from the Land of a Thousand Fables were left for years without Artorius Vigo's supervision. During this time they went completely feral, transforming into three wild boars which attacked anyone who dared approach their ruined home. 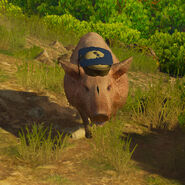