Through Time and Space

Through Time and Space

Sandcrabs
Hound of the Wild Hunt
Through Time and Space is a main quest in The Witcher 3: Wild Hunt.

Talk to Avallac'h about what you did on Bald Mountain. He will inform Geralt that his victory over Imlerith made him believe that they may have a chance at victory after all. He will propose getting rid of the other 2 generals starting with Ge'els, although not killing him but instead convincing him to stop supporting Eredin. Ge'els was loyal to their previous King Auberon Muircetach whom Eredin poisoned, thus the plan is to bring Ge'els to Corinne Tilly to show him what really happened to his king. But first Geralt has to find him thus he will have to travel to Tir ná Lia. After everything is explained you will have the option to head out immediately or tell him to wait at the location of the portal to other worlds which he found. The portal is in the house where you met Sarah, go to the basement and destroy the wall if you have not previously and approach the portal.

After entering the portal you will appear in a desert world, Avallac'h will tell you that there used to be an ocean there which was "alive" and not in the sense that it had fish in it. Along the path, there are several tree stumps that you can loot. These tree stumps are not detectable using Witcher Senses. After a walk you will reach the next portal, however you have to wait for it to open, while waiting you will be attacked by Sandcrabs so kill them. Once the portal opens jump in and you will move to the next world.

Geralt will be separated from Avallac'h and will have to find the next portal himself. After walking down some stairs you will soon see the next portal and an Aard Place of power.

Note: This is your only chance to get it so don't leave without it.

There will be poisonous fumes all around that will choke Geralt to death and Golden Oriole won't help here. You will have to run through them fast and take breaks on higher ground. After passing 2 poisoned areas you should reach the Place of power which will be around the corner to the right. Now from there move north which is opposite of the direction to the portal, but you will reach lower ground, pass another poisoned field and look to your left. You will see rocks that look like pillars and another poisoned field and higher ground you need to reach. Now move in the direction of the portal past the next field and you will be able to climb much higher, you will know you are in the right place as there will be a large skeleton in the next field when you reach the top. Run through it to reach the next safe spot and the portal should be within your reach. Just pass one last field and you will reach it, enter it to reach the next location. You will end up underwater, however the next portal will be very close so swim right into it.

Geralt will remark how cold it is, and after a short walk will find an ice wall that needs to be broken with Aard, Igni, or a hit from a sword. While outside in the blizzard and not in cover, Geralt will be freezing and take continuous damage from the Snowstorm status effect that also prevents continous recovery of health from sources such as the Swallow potion and eating food. The intended way to pass this section is to sprint from cover to cover and use campfires, stoves, and other sources of flame to recover health.

The Quen sign helps a bit by providing a second or two of safety from the snowstorm before breaking, but if cast when Geralt is already freezing, it will break instantly. White Raffard's Decoction can be used to recover vitality instantly if needed. If you've brewed it, the Ekhidna decoction is probably the best potion to use here, as it allows recovery of vitality from actions that consume stamina. Jumping every two seconds or so to recover vitality will allow you to proceed through this section and even explore what's left of the snow-covered town with little to no danger. Take care not to stray past the very edges of the town, though, as the snowstorm will intensify and kill Geralt almost instantly.

Once Geralt exits a house located some distance downhill or approaches the front of the house from another direction, Geralt will remark in a cutscene that he should head to the lighthouse where a fire is burning. On the way to the lighthouse, you'll find containers of random loot, as well as notes and writings from travellers and prior inhabitants of the town, namely Traveler's notes, Anna's notes, and Ervyl's diary. In the lighthouse itself, City Secretary's Diary can be found.

Depending on how you proceed to the lighthouse, you may encounter Hounds of the Wild Hunt along the way; two while inside a barn-like building if you decide to enter it, and three more in a clearing south-west of the lighthouse, surrounded by five lit braziers.

To proceed, you need to enter a chamber below the lighthouse, the entrance to which is located on the south-west side of the stone platform the lighthouse stands on. Inside you find Avallac'h warming himself by a fire. Geralt can converse with him and ask about various topics before the next portal opens. Among other things, Avallac'h will reveal that the frozen world they're in is the Ice Plains where Geralt previously fought Eredin's reflection. Once you've talked enough, end the conversation and walk through the portal that appears.

At last you are where you wanted to be. Follow Avallac'h to find Ge'els. Along the way, you can pick up a report regarding the advance of the White Frost, which is sitting on a bench next to a fountain. When you reach Ge'els, he will be painting an elf girl in a Picassoesque style. A short conversation will ensue, and he will agree to go with you. After witnessing the dream, Ge'els will agree not to aid Eredin when the battle starts and tells them how to lure him into a trap using the Sunstone. Avallac'h helps Ge'els return to Tir ná Lia and the quest ends.

News that Ciri and Geralt had defeated and killed Imlerith reached Avallac'h at once. I don't know how this happened, exactly, save perhaps that quickly learning of such things is the very essence of being a "Sage."
At any rate, a wild notion possessed him. What if they could now sway Ge'els, one of Eredin's most powerful allies? What if they could bring him over to their side? A key general and advisor, Ge'els was the individual Eredin relied on for reinforcements. For his plan to work, he would need a dreamer, so Triss pointed him towards Corinne Tilly in Novigrad. Thus, by the time Geralt and Ciri rode into town, everything had been arranged. Now all they needed was Ge'els...
To reach him, Avallac'h and Geralt would need to travel to the land of the Aen Elle, a voyage that would involve interdimensional travel, which in turn meant a whole lot of teleporting. Geralt vomited a little in his mouth and prepared to face the music.
An unpleasant surprise was in store for Geralt after he departed the Ddiddiwedht Desert: Avallac'h was no longer with him. The Sage had warned him that something of the sort might happen, but Geralt had quietly hoped this would not be the case. His hopes had been misplaced, and now the witcher would have to stumble blindly and alone as he searched for the passage to the next world.
Ah, what I wouldn't give to see with my own eyes what Geralt saw in the worlds he traversed. Yet most intriguing of all seemed the world of the Aen Elle, the end point of Geralt's and Avallac'h's journey. To behold the glories of this ancient elven civilization... but alas, fate granted this privilege not to a poet but to a witcher, who returned not with paeans to the distant world's beauty, but with a general of the Wild Hunt - one Ge'els. I must be fair, however, and state that the general proved useful.
Avallac'h decided to bet all on the ace he had tucked up his sleeve. With the help of the dreamer Corinne Tilly, he proved to Ge'els that Eredin had killed Auberon, the erstwhile king of the Aen Elle and the object of Ge'els' undying devotion.
Confronted by this revelation, Ge'els could hardly return to business as usual. He struggled internally for some moments before revealing the one way Geralt and friends could hope to defeat Eredin and company. They would have to battle Eredin and the Hunt in their own world and on their own terms. The first step - to use the Sunstone to summon the Naglfar. A plan of action was devised - Geralt, Ciri, the sorceresses and Avallac'h would sail to Skellige to find the stone, while Zoltan and I would stay behind in Novigrad to keep the hearth fires burning and secure our friends' return. 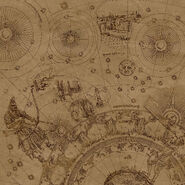 Map of the spiral. Thus map of adventure.