Woe to the Vanquished
To the Temple is a quest in the Prologue of The Witcher 2: Assassins of Kings.

The solution is found at a well in a small yard surrounded on three sides by commoners' houses. The most immediate access to this area becomes blocked by a wagon as Geralt approaches it, leaving only one way to the well, through several La Valette soldiers.

Once down the well, a path can be found to the castle sewers. Several drowners lurk in the water but should not be much trouble. There is also a Place of Power granting a Vitality bonus, tucked away in a disused cell.

Continuing through the only available unlocked doors, Geralt gets under the keep, finds a set of stairs, and encounters more La Valette soldiers on the way up. Upwards through another door is a cemetery, crowded with headstones and herbs; Geralt also spots Scoia'tael on the shores below, in a brief cut-scene.

Further on, Geralt finally enters the temple proper, encountering one heavily armed-and-armored guard and two with shields. The 'heavy' guard carries the key to the gatehouse, which gives access to a chest and allows Geralt to open the gate for Foltest, Roche and the rest.

An ancient temple stood within the walls of La Valette Castle, and the defenders had hidden Foltest's children there. As was the custom during attacks, the gate to the sanctuary was firmly shut. Battering it down would take the soldiers far too long to satisfy the irritable Foltest. The king ordered Geralt to find another way inside, so the witcher went to search for a back entrance.
As it turned out, some La Valette soldiers had barricaded themselves in a back alley. The witcher thought it strange that someone would defend a dead end, and concluded that the alley could conceal a secret passage to the temple grounds.
Geralt's hunch proved correct. The alley led to a small square, where there was a well through which La Valette soldiers were passing between the temple grounds and the town. The witcher dropped down into the well and entered a secret passage.
Lo and behold, the secret tunnel accessed through the old well proved an alternate route to the sanctuary. Accustomed to navigating tight corridors and caves, the witcher reached the exit in no time. Now he had to open the gate from the inside and let the restless king and his troops in. But the gate was defended by La Valette soldiers. Geralt found himself searching the yard for the gate mechanism while fending off attacking foes.
Having overcome the defenders and opened the temple gate, Geralt went out through it to show Foltest in. He had accomplished this mission, yet more danger awaited on the path leading to the king's bastard children. 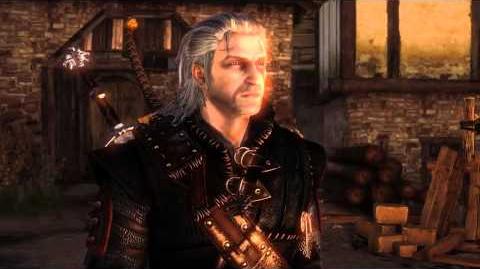 To the Temple
Add a photo to this gallery
Retrieved from "https://witcher.fandom.com/wiki/To_the_Temple!?oldid=533954"
Community content is available under CC-BY-SA unless otherwise noted.