Trolls are giant, humanoid creatures. Trolls possess a certain level of intelligence, and are able to use simple sentences to communicate with humans and amongst themselves, while others are even able to draw[1] or write[2]. They usually reside in the wild, but often are found living under bridges (which they often build themselves) and demand toll from travelers. While witchers used to kill trolls in the past (as some trolls eat or ate human flesh), nowadays often people are used to having a troll around, especially considering that paying the toll is cheaper than maintenance of the bridge.

Yennefer had a giant mountain troll penis in her collection. There is a common belief that trolls are petrified by sunlight, but it's not true.

"One day, I ride up and what do I see? A bridge. And under that bridge sits a troll and demands every passerby pays him. Those who refuse have a leg injured, sometimes both. So I go to the alderman: 'How much will you give me for that troll?' He's amazed. 'What are you talking about?' he asks, 'Who will repair the bridge if the troll's not there? He repairs it regularly with the sweat of his brow, solid work, first rate. It's cheaper to pay his toll.'"
- Geralt on finding lack of work over time, pg. 160, The Last Wish (UK edition)

near bridges and ravines

One troll appears in the downloadable quest Troll Trouble. You can meet two other trolls in Chapter II, the Troll of Vergen and his wife. Another troll appears near the camp followers' encampment, if Geralt chooses Roche's path, in Chapter II, but that one is hostile. As of the Enhanced Edition, this troll may also be encountered on Iorveth's path.

According to legend, trolls are creatures born of earth and their body is made of rock. They hate sunlight, which kills them by turning them into inanimate stone, so they subsist only at night. That's much for legends. And the reality? Well, as always, truth is much more prosaic. Trolls are living creatures like me and you, and they prefer day to night, for they are so clumsy that they stumble on stones in the dark, spilling vodka. Their skin is indeed hard like stone, but beneath there are muscles and a heart that pumps blood. And since they bleed, they can be killed.
Trolls are primitive, true, but they are counted among sapient creatures. They can speak our tongue, though not very colorfully. They mate in pairs for life and, despite what the spiteful would have, they have feelings (even if they express them unceremoniously). All trolls share fondness of building and alcohol. They combine these passions by erecting bridges and drinking away the money gained from collecting tolls. Thus originated the sayings: "straight like a troll bridge", when something is twisted, and "trolling it a day", when construction workers make a break for "lunch".
If a troll spots his opponent from a distance, he will try to crush him by throwing huge rocks. Trolls are surprisingly accurate when throwing missiles, and their thick skin provides them ample protection from arrows, so exchanging fire with them always end in the trolls' victory. The beast must be reached as fast as possible, and slaughtered with strong blows. They are sluggish, so a swordsman that evades first a thrown rock, than a rock-heavy fist, has a chance of survival. One should not take risks, however, and if possible reach an understanding with the monster.
Trolls are huge beings, so knocking them down or unbalancing them in combat is highly unlikely. Their ability to regenerate is legendary, and means they need not fear wounds or oils increasing bleeding. However their fast metabolism has a darker side, since these monsters are very susceptible to venoms – these swiftly reach all recesses of the trollish body.

Geralt can encounter many rock trolls and ice trolls, hostile and friendly, during his adventures. Those friendly include one named Boris living in Velen and another name Bart employed by Sigi Reuven in Novigrad. Furthermore, there are the two trios, farting trolls living in cave in Skellige called Jesse, Joe and Dodger (their voices are spoken by known Youtubers, as part of an Easter egg) and than Ogg, Pogg and Rogg.

In The Witcher: Adventure Game trolls can also cross path of Geralt, Yarpen, Triss and Dandelion.

Since June 29, 2015 until the game was removed, Troll was one of playable characters in the MOBA The Witcher Battle Arena.

What are Trolls? The Witcher 3 Lore - Trolls 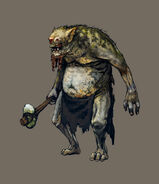