Troll Trouble is a quest in Chapter I of The Witcher 2: Assassins of Kings. It was initially released as free DLC, and then added to the game as part of patch 1.1 on 25 May 2011.[1]

In practicing their trade, witchers abide by a code that clearly explains what they can and cannot do. Geralt claims he invented this code himself, to have an excuse for refusing unwanted jobs, but I think such a stratagem would be too complicated for him. Either way, Geralt noticed that Bernard Loredo had posted a bounty on the head of a troll living in the area. Because a troll is a sapient creature, it falls under the code as huntable only if evil. The curious witcher decided to check it out.
On a forest road he met a farmer from Lobinden and learned some things about the problems with the local Troll. The monster once worked on a bridge on the river, but took to drinking and started causing trouble. The peasant had intrigued Geralt - he beseeched him to talk with Chorab, the elder of Lobinden, before killing the troll.
If Geralt speaks with Chorab:

Chorab had a peculiar request. Not only did he not want the monster to die, but he wanted the witcher to cure the troll's alcoholism! Things were starting to get interesting.
If Geralt avoids killing the troll:

Geralt had a talk with the troll, man to man. It turned out that the monster fell into addiction after his wife had been killed. An event like that must have been the talk of Flotsam. Geralt decided to question his acquaintances.
The witcher learned that the female troll had been killed by one Dmitri, who then sold her head as a trophy to Sendler. It was that poacher who told Geralt that one of Dmitri's men hung around the inn. Geralt headed for Flotsam.
The ruffian spilled the beans and Geralt learned that Dmitri was up to something in the cemetery near Lobinden.
Geralt killed Dmitri and his bandits at the burial ground - the lucky bastards wouldn't have to go far now. The female troll was avenged, and the witcher went to see her husband.
The troll was as happy as befit his size, that is immensely. He traded alcoholism for workaholism and began repairing the bridge. Geralt knew Chorab would be pleased and he went to get his well earned reward.
Geralt picked his well earned reward from Chorab and left, content that he aided the local community, had a hand in the development of infrastructure, solved an alcohol problem and got paid on top of it all. 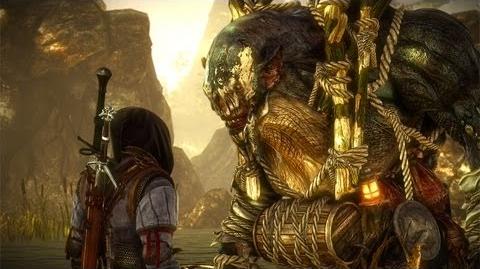