The Witcher 3: Wild Hunt
Uma, also known as the Ugliest Man Alive, was a cursed humanoid living at the Bloody Baron's castle at Crow's Perch. There, he serves as a diversion for the Baron's men, akin to a "court jester" as per Geralt's description.

Uma was first seen on Skellige by Skjall, before being picked up by the local jarl, Donar, who kept him for a time. He never intended to sell Uma but when a merchant who proclaimed a royal court on the main continent would love to have Uma as a jester and offered a great deal of coin for him, Donar sold him, though he found the idea of a jester laughable.

The merchant then took Uma to Novigrad where he bumped into Phillip Strenger. They played several rounds of Gwent, in which Phillip kept winning, and as a last ditch effort, the merchant wagered Uma. Phillip decided to play the merchant again, more to give him another chance to win some of his money back than wanting Uma, but he ended up winning the last round and thus Uma came into his possession.

Phillip then brought Uma to Crow's Perch where the being became an oddity and diversion for the keep's residents. Given that Uma ate very little, and did not prove troublesome, the Baron let him stay.

Later, just as Geralt was informed that Ciri had taken off for Novigrad, Uma unexpectedly stumbled through the door, followed shortly by Sergeant Ardal who caught the creature and told them to "pretend we were never here" before leaving the room with Uma. Bewildered, Geralt questioned the Baron about what just occurred, who then told him how he won Uma.

As Geralt investigated into Ciri's whereabouts, he finally concluded that Uma must be the key to finding her and started to take Uma with him to Kaer Morhen where he hoped to lift Uma's curse. However, the witcher was apprehended en route by some Nilfgaardian soldiers who escorted both Geralt and Uma to the Royal Palace in Vizima to talk to the Emperor. Emhyr var Emreis didn't appear thrilled to see Uma, and even less thrilled when Geralt suggested Uma could even possibly be Ciri, but nevertheless sent them on their way.

At Kaer Morhen, Yennefer revealed that to lift Uma's curse she intended to subject him to the first stage of the Trial of the Grasses, which earned her the ire of the witchers there. However, Vesemir first attempted an alternative, safer procedure, taking Uma up into the mountains at midnight, and gave him hemlock tea. Vesemir was able to see that in Uma's relaxed consciousness, he had a different look in his eyes, as if he understood what was happening. Going up into the mountains to lift the curse ultimately failed, leaving no other choice but the Trial. Thus, Uma was restrained and imbued with The Decoctions of the Grasses while Yennefer maintained a stabilizing spell on him for an entire day in order to prevent the potions from destroying his organs. After the Trial, Uma successfully transformed into his real form as Geralt and Yennefer use a phylactery to catch and contain the curse that had transformed him in the first place.

If Geralt discovered Skjall before Uma:

Geralt didn't know exactly what the deformed being that had sailed to Skellige in Ciri's boat was. He had no doubt, however, that it was somehow tied to her fate - and just might be the key to finding her.
It turned out the diminutive freak had spent sometime in the possession of Donar, jarl of Hindarsfjall. Later Donar sold him to a Novigrad merchant who thought he was perfect material for a top-notch jester.
Based on Skjall's detailed description, Geralt was able to recognize the creature at the Baron's castle as the very same deformed midge Skjall saw on Hindarsfjall.
Sadly, it was impossible to communicate with this "Uma" (as the creature had come to be called). he seemed to dwell in a world all his own. Yet Geralt knew Uma held the key to finding Ciri. Even if no pertinent information was forthcoming from the creature's lips, surely further investigation would squeeze some solution out of this riddle.

If Geralt discovered Uma before talking to Skjall:

When Geralt encountered a misshapen midget at the Bloody Baron's court, he didn't think much of it. Yet when he heard a similarly deformed being has washed up on Skellige's shores in the same boat in which Ciri and her mysterious companion had sailed off shortly prior, he connected the two at once. It was clear this rough-hewn hunk of flesh was the key to finding Cirilla.
Sadly, there was no communicating with Uma. The gnarled twiglet lived in his own miniature world. Yet Geralt knew Uma was the key to finding Ciri. Even if no pertinent information was forthcoming from the creature's stunted lips, surely further investigation would squeeze some solution out of this riddle.

Though Yennefer and Vesemir agreed Uma was suffering from a powerful curse, they could not reach a concensus about how to go about lifting it. Sharp words were exchanged before Vesemir stepped in and announced that before Yennefer did anything he would try one of the traditional witcher methods.
All that was left to the others was to wait.
Though Vesemir's method had worked to disenchant the famous Swan of Poviss, it brought no breakthrough here. Vesemir did, however, succeed in confirming that Uma's body was a sort of magic prison in which some other being was trapped.
Yennefer's method did not prognosticate a high chance for Uma's survival - yet was now the only remaining option for lifting the curse.
The ritual succeeded beyond their wildest expectations. The person cursed inside Uma turned out to be none other than Avallac'h, a powerful elven Sage the witcher had met before. 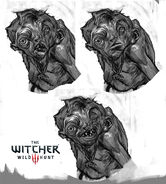