Under a Fiery Sky

Under a Fiery Sky is a quest in Chapter V which Geralt undertakes if he chooses the Witcher / neutral path.

Like Hope Burns Bright and The Flame that Cleanses, this quest sees Geralt fight his way to the field hospital aided by his ally (in this case, Shani), deal with the street fighting, and make it to the swamp cemetery. It is the framing quest for Chapter V as Geralt officially declares that he has chosen a path, the Witcher / neutral path.

The quest begins when Geralt meets Zoltan on the dike after speaking with the presiding official. The dwarf explains the current situation in Old Vizima and alerts the witcher to the fact that Shani has set up a field hospital there. The Witcher then sets off to find Shani, but first he must fight his way through the warring Scoia'tael and Order factions blocking the only path to the gate.

As our hero reaches the gate, we are treated to a cut scene of King Foltest himself, recently returned from abroad. As the regent and his retinue make their way through the chaos inside the gate, they are suddenly ambushed by more Scoia'tael intent on assassinating the king. Victory, and indeed the monarch's survival, seem far from assured when who but the Grand Master of the Order of the Flaming Rose should appear to save the day.

De Aldersberg warns the king that his aid might not be so timely in the future and demands total control over the Viziman forces. Foltest rejects this proposal outright and the two part coolly. The king and his entourage are about to return to the castle to discuss further strategies when the main gates open revealing Geralt.

At first, Foltest seems hardly pleased to see the witcher and grumbles about it to Velerad, but ultimately demands that Geralt accompany the entourage back to the castle for a chat.

Back at the castle, the king sets two tasks for the witcher: delivery the princess from the striga curse and eradicate Salamandra. He also sneaks in a little chit chat about women and a quick round of dice poker. He tells Geralt that Triss Merigold, Velerad and Count de Wett are at his disposal as trusted advisors of the court and dismisses him. Monarchs can be so rude!

Geralt takes the opportunity to converse with the royal advisors. After consulting each of them, he decides to explore the castle a bit more. A group of courtiers is dancing and watching them is a noblewoman who seems to be alone. The witcher introduces himself and learns that his newest acquaintance is Antoinnette, from the duchy of Toussaint.

She suspects they have met before, but amnesiac as our hero remains, he has no memory of the event and just shrugs off the idea. Undeterred, Antoinnette cuts to the chase and asks the witcher if he would be willing to render a small service, in return for a reward, of course. Geralt agrees and bids her farewell. Just then, he is summoned once again to speak with Foltest, but this time in the regent's private chambers.

The two revisit the tasks at hand and the king gives Geralt leave to kill Adda, if necessary, but admonishes him that this should be done only as a last resort and must absolutely spare the princess any pain or suffering. Otherwise, Foltest tells the witcher that his friends will suffer a similar fate. He then takes a moment to sneak in a little chit chat about women and a quick round of dice poker and then sends our hero on his way, telling him to speak with the chamberlain about travel arrangements back to Old Vizima.

Once back in the old city, he is met by two nurses who are trapped and can not get to the field hospital where they intend to help Shani tending the sick and injured. Naturally the witcher offers to escort them safely to their destination. They gratefully accept his escort and make their way cautiously behind him to the hospital. Once there, they offer to show their gratitude a bit more tangibly if he drops by when Shani is not around. Mission accomplished and one date lined up!

I took the nurses to the temporary hospital set up in the heart of Old Vizima. The nurses have reached the hospital.

I met Shani at the hospital, but we were interrupted by a messenger who told us that a striga was seen in town. I have to tend to the monster. First and foremost, I must deal with the striga.

A Talk with Shani

I slew the beast... Now back to the hospital. Shani and I need to have a conversation, in relative calm. I can now return to the hospital and speak with Shani.

The Hospital Under Siege

I defeated the Knights of the Order. Things are getting dangerous here. I should take Shani somewhere safe, for a while at least. I need to get Shani out of the hospital.

It's getting hotter.. Luckily I can see the breach. A last push... We must get to the breach. One final push.

We've reached the swamp. Shani must go to the druids' cave for more medicine. I'll need to protect her from the swamp's less friendly inhabitants. I must help Shani get to the druids's cave. (8000 XP) 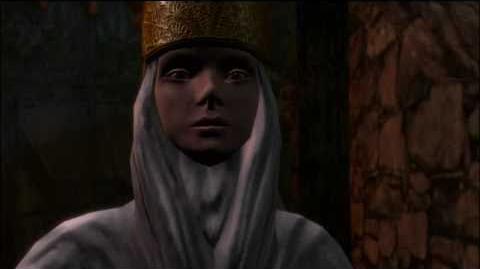 Under a Fiery Sky

Retrieved from "https://witcher.fandom.com/wiki/Under_a_Fiery_Sky?oldid=489720"
Community content is available under CC-BY-SA unless otherwise noted.