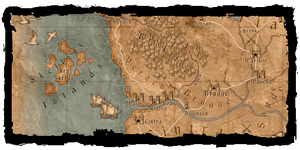 Undvik is one of the larger islands in the Skellige archipelago. It is described as lying west of the main islands of Ard Skellig and An Skellig.

In population of Undvik was forced to abandon the island after an ice giant appeared. Hjalmar led an expedition to kill it. Geralt's actions influence the events that take place on this expedition. During their Skellige campaign the Nilfgaardian Empire laid their fleet off the coast of Undvik and later made an encampment on the shore to assist Ciri against the Wild Hunt.

Retrieved from "https://witcher.fandom.com/wiki/Undvik?oldid=217831"
Community content is available under CC-BY-SA unless otherwise noted.