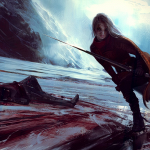 Troglodyte born of the union betwixt a fleder and a harpy
I'm just JK.

I'm a massive (massive) film fan/geek, especially horror. Can't get enough of horror, love it whatever form it's in - books, comics, films, video games - all of them. I love movies. Good movies, bad movies. Drama movies, comedy movies. Coppola movies, Uwe Boll movies (I jest, of course, no-one likes Uwe Boll movies). No, seriously though, I will watch anything at least once. Oldboy may just be the greatest film ever made, though The Godfather II's a strong contender too.

I'm also an avid (somewhat obsessive) gamer. I will play any and all, especially RPGs. Mostly the Sims though, having played it religiously since the series first came out. I'm big into my music, a lot of genres too. My favourite bands of all time ever are Joy Division and The Smiths, though I love me some Zeppelin as well. I will mostly be contributing to video game Wikis here.

"Laugh, and the world laughs with you. Weep, and you weep alone."

Retrieved from "https://witcher.fandom.com/wiki/User:Bobjosh175?oldid=357992"
Community content is available under CC-BY-SA unless otherwise noted.