Where to Go in The Witcher 3 and What to Kill

We take a quick trip through some of the highlights of Geralt's journey through the enormous world of The Witcher 3. All aboard!

If you're looking for a game to really show off the abilities of your PC, it has to be The Witcher 3. Powered by CD Projeckt RED's REDengine – and helped along the way by NVIDIA GameWorks technology – it boasts an absolutely enormous and beautiful world, and while the meat of the game is all about quests and battles against huge, vicious monsters, you can also take your time to appreciate the detailed and varied scenery.

Of course, it packs some pretty high system requirements, but the good news is that if you've decided that now's the time to bring your GPU up to date, you can get a free copy of The Witcher 3 with an NVIDIA GeForce GTX 960 or better. But once you've installed all 40GB of game, where should you visit to grab some impressive screenshots? Here's a quick guide to some of its magnificent locations as well as several monstrosities you'll find yourself up against. 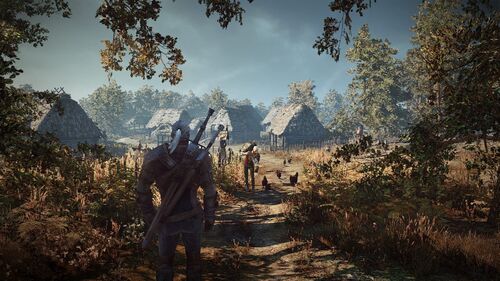 If you're on the lookout for a bit of a chill and some bucolic idyll in the countryside, White Orchard might not be the right place to go. Yes, it's a peaceful village boasting some lovely fruit orchards – hence the name – but when you arrive there early in the game you'll find that all's not well in White Orchard. It's being menaced by a griffin, and someone needs sort it out with extreme prejudice. Guess who that someone is? Happy hunting! 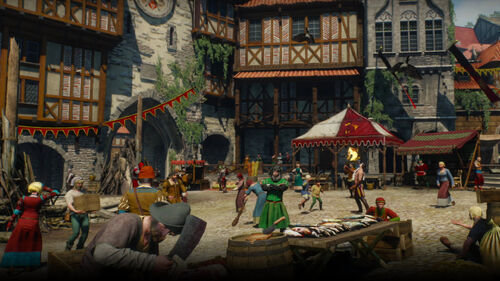 Sometimes all those wide open spaces can get a bit much, don't you think? If you're instead craving a bit of hustle and bustle, head for Novigrad; it's one of the largest cities in the world of The Witcher 3, with over 30,000 inhabitants and plenty going on. Novigrad's more than just a busy city centre; there are many areas to explore, each with their own character and an assortment of side quests to keep you entertained. Visit the Dockside, Grassy Knoll and Far Corners, and you'll still have only seen a fraction of what Novigrad has to offer. 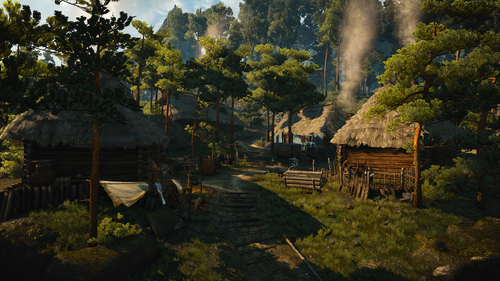 It's another of these peaceful-looking countryside villages that isn't quite as delightful as appearances would have you believe. Downwarren used to be a delightful place, but the war has awoken an ancient, evil power that's killing the villagers and making the whole place a lot less inviting. Naturally it's up to Geralt to solve the mystery of the nearby Whispering Hillock and save more locals from an unnatural and unpleasant death. 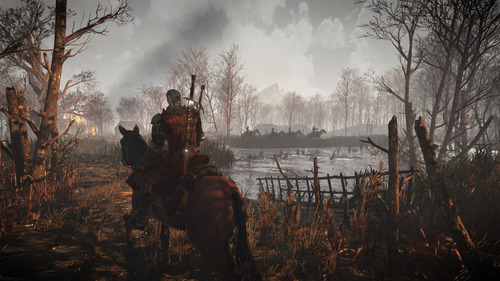 Swamps are never good news, are they? And in The Witcher 3 they're even worse news. Not only are they typically swampy, they're also full of hidden dangers, such as horrible Drowners - malevolent zombie-like things, said to be the reanimated corpses of drowned travellers – and foul-smelling Water Hags. In the normal course of events you'd give the whole swamp thing a wide berth, but you're not going to get anywhere in this game without occasionally finding yourself up to your waist in stagnant ooze. 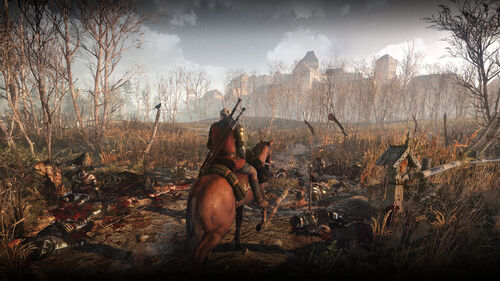 Set against the backdrop of a war in which the Empire of Nilfgaard has invaded the Northern Kingdoms, a large area of The Witcher 3 is a desolate no man's land, ravaged by the ongoing conflict. It's not a fun place to visit; battlefields are littered with the bodies of fallen warriors, murky swamps and forbidding forests conceal all manner of unwelcoming monsters, and any humans you come across are frightened and suspicious. 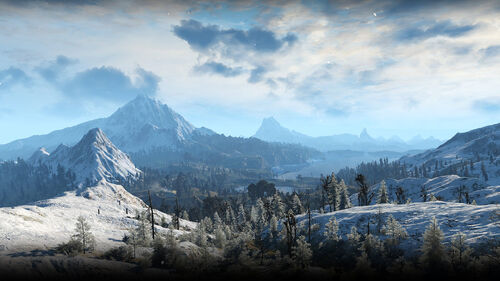 For some truly breathtaking scenery, Skellige is the place to be. A vast archipelago of six islands situated in the North Sea, the frozen, wind-swept Skellige can be reached by sea from Novigrad – once you've earned the requisite 1,000 coins to pay for your passage and battled pirates along the way. Here you'll find glorious snow-capped mountain peaks, frozen forests, coastal villages and fortresses such as Kaer Trolde, not to mentioned battle-hardened marauders inspired by Viking legends, all linked by further perilous sea crossings in which Geralt's boat is set upon by sea monsters. If you see a lovely mermaid along the way, be prepared for it to transform into a vicious Siren. 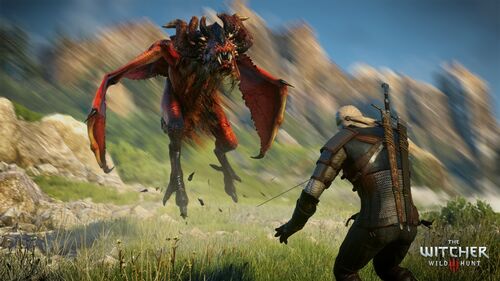 It might look a bit like a dragon with its scales and enormous leathery wings, but a Wyvern's a lot smaller than a dragon, with long, straggly fur on its underside that's an excellent showcase for NVIDIA's HairWorks tech, and it doesn't breathe fire; in fact it's quite vulnerable to Geralt's fire spells. That doesn't mean you should approach it with anything less than caution; it's fast and deadly, and like the Griffin it'll circle in the air before barrelling in on a ground attack run. 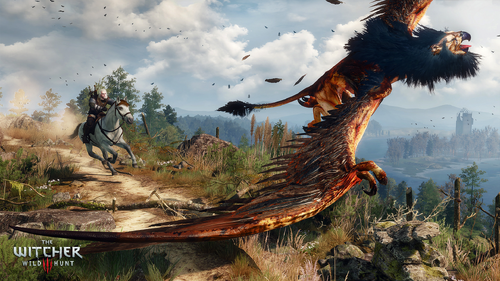 Half lion, half eagle and completely bad tempered, the Griffin, which also boasts convincingly realistic fur created with HairWorks, is your first taste of the sort of horrific monsters you'll have to take down in The Witcher 3. Capable of flapping away with an entire cow in its talons, it makes for a thoroughly challenging fight, circling in the air before swooping towards you at maximum speed, then lunging at you on the ground. To successfully take it down and claim its head as a trophy you're going to need a thunderbolt potion, which dramatically increases your attack power, as well as a sharp aim with your crossbow and lightning reflexes to dodge its aerial attack runs. And once it's dealt with there's worse to come – when you come up against an archgriffin you'll have a lot more of a fight on your hands. 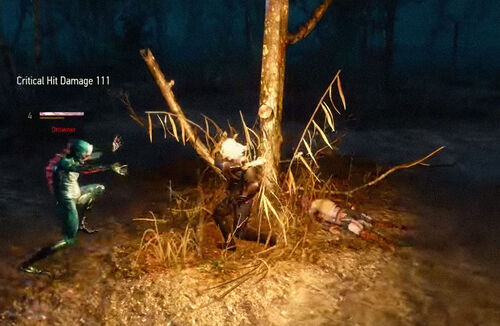 Found in the swamps of White Orchard, Drowners are just as unpleasant as their name suggests. Said to be the reanimated bodies of lost travellers who've fallen into the swamp, they're foul zombie-like creatures and distinctly unfriendly, and while a single Drowner isn't too hard to fend off, they tend to attack in groups, making for a much tougher fight. Try to avoid the swamps early on before you've levelled up a bit, and when you do decide to take on some Drowners, don't let them surround you. 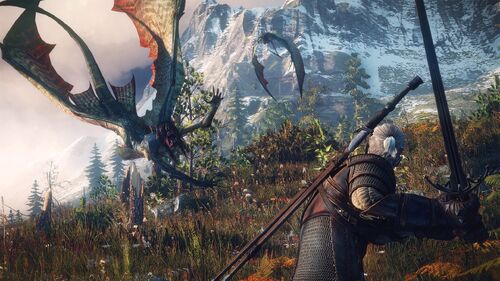 Not content with sitting on rocks, looking beautiful and luring sailors to their doom with sweet music, the Sirens of The Witcher 3 take a much more proactive and vicious approach. While they might initially appear to be lovely mermaids they swiftly take on a much less attractive aspect, revealing themselves as giant hybrids of fish, bird and human with sharp claws, long whip-like tails and the capability to attack in the water, on land or in the air. 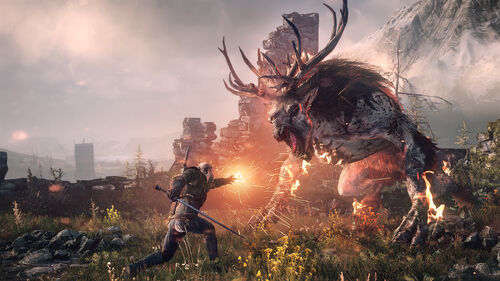 Coming across as an unholy blend of an elk, a lion and a werewolf, complete with a thick mane that again shows off powers of HairWorks, the mighty Fiend uses its massive antlers for a brutal ramming attack, while its third eye is the source of strange telepathic powers that it can use to emit a hypnotic spell capable of temporarily disorienting Geralt. It's susceptible to fire, though, so have your Igni spell at the ready and be quick to dodge those antlers when it lunges in for an attack. 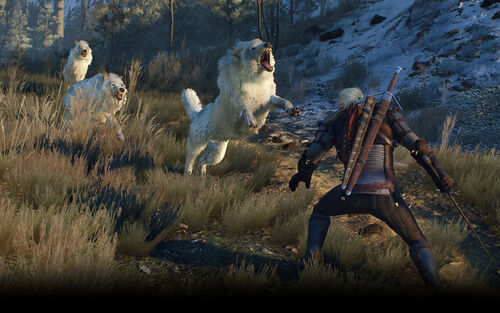 Don't underestimate wolves. They be one of the few things you'll fight in The Witcher 3 that actually exist in the real world (you'll also end up killing quite a few humans along the way as well, of course), but just because they're less supernatural and less enormous than the other beasts you're battling, it doesn't mean you shouldn't treat them with respect. As with Drowners, a single wolf won't pose you too many problems, but these are pack animals that'll happily surround you and have you for breakfast, given half the chance. Bad doggie!

This blog was brought to you by NVIDIA.