Edit
watch 12:45
Witcher Lore: Vampires
Do you like this video?
Play Sound

Vampire language, able to use languages of other races

Some species are almost unkillable

Vampire is a hypernym used to refer to a number of creatures that thrive on blood, which contains their victims' life force.

Vampires in Sapkowski's works break with many popular stereotypes. In particular, vampire repellents such as holy water, crucifixes, garlic, wooden stakes, etc. are nothing but folklore within the Witcher saga. For example, Regis, the vampire who accompanies Geralt for a time, was once decapitated, staked through the heart, sprinkled with holy water and finally buried, but that did not prevent him from regenerating, albeit slowly.

As Regis traveled with Geralt, he clarified on a number of myths regarding vampires as such:

A vampire, or upir, is a dead person brought to life by Chaos. Having lost its first life, a v. enjoys its second life during the night hours. It leaves its grave by the light of the moon and only under its light may it act, assailing sleeping maidens or young swains, who it wakes not, but whose blood it sucks.
pg. 143, Baptism of Fire (UK edition)
"Don't scoff. You can't be a stranger to vampire bite marks. Ever come across a case of a vampire ripping its victim to shreds?"
"No. That never happens."
"In the case of higher vampires — never, I agree," Emiel Regis said softly. "From what I know alpors, moolas, bruxas and nosferats don't mutilate their victims. On the other hand, fleders and ekimmas are pretty brutal with their victims' remains."
pg. 151, Baptism of Fire (U.S. edition)

There is at least two points where the game breaks with Sapkowski's written works regarding vampires:

Of named higher vampires, Geralt can encounter up to four: Regis, Dettlaff van der Eretein, Orianna, and the Unseen Elder of Toussaint.

Throughout the main story quest La Cage au Fou, Regis and Geralt's exploration of Tesham Mutna reveals that vampires descend from three ancient tribes that arrived on the Continent during the Conjunction of the Spheres. A single portal opened from their world in caves underneath what later became Toussaint. The symbols of these tribes remain deep within the ruins, serving as reminders of their original realm.

The main story also expanded on the capabilities of a higher vampire: they are unique and have skills that accompanies it, and they are impregnable to most methods of extermination, practically giving higher vampires some form of immortality; and a set of vampiric codes that applies to all vampires, no matter the classification:

- A vampire killing another is forbidden and any vampire that does this is considered a traitor to the vampiric race.

- If a vampire sees another wounded, one can leave them alone, or help nurture them.

Alp in The Witcher 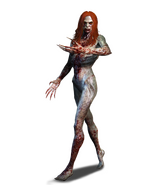 Alp, in The Witcher 3

Bruxa, in The Witcher

Bruxa, in The Witcher 2 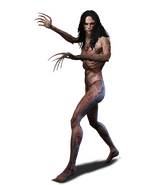 Bruxa, in The Witcher 3 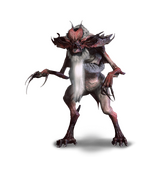 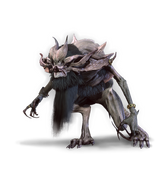 Katakan in The Witcher 3

Fleder, in The Witcher 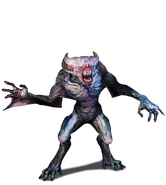 Fleder, in The Witcher 3 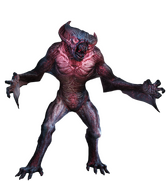 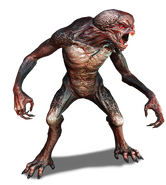 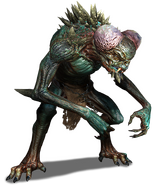