Velen, also called No Man's Land, is a province situated in northern Temeria, north of its capital Gors Velen.[1]

In The Witcher 3: Wild Hunt, the former province has become a war-torn swampland under Nilfgaardian occupation with borders close to the cities of Novigrad and Oxenfurt. It's one of the major regions of the game, and its swamps with dense forests represent dark and mysterious elements of the plot.[2]

In the depopulated wastes of No Man's Land one often runs across armed men of all stripes - mercenaries, soldiers from the disbanded Temerian legions, marauders, and common bandits.

The former Temerian province of Velen has become a war-ravaged no man's land.

Velen is where the forces of the Empire clashed with the armies of the Northern Kingdoms, forcing the battlefront both north and south, leaving the area which lies between a desolate wasteland. Its people were killed, raped and hanged – all the worst things imaginable.[3]All these sufferings only added to the misery the people of Velen had to live through.

Neither the armies of the Northern Kingdom of Redania nor of Nilfgaard could achieve victory in their battles here. In the wake of both sides' temporary withdrawal, a semi-autonomous state under the leadership of Phillip Strenger - a former Temerian commander better known by the Bloody Baron moniker - has been established in Velen through decisive (if ruthless and amoral) action and force of arms, consisting of the remnants of the former Temerian army.

The Baron's rule is harsh, and perhaps reflective of the land itself. His men are ill-disciplined and overly fond of brutalising the local population. Law and order are in short supply, as are food and supplies. As such, Velen has become known as No Man's Land, a war-ravaged and unforgiving place, ruled over by a man of similar temperament. The Bloody Baron rules from Crow's Perch, a rundown fortress occupied by the Baron and his forces in the aftermath of the recent battles between Redania and Nilfgaard.

The land of Velen, located in western Temeria with its capital in Gors Velen, is one of the poorest provinces in the kingdom. Its territory encompasses the isle of Thanedd, home to the famous magic academy, which, along with Gors Velen, constitutes the commercial and developmental mainspring of the entire province. Velen is a stop on the Novigrad trade route running through Cidaris, Vergen,[4] Brugge, Cintra and other such southerly realms.

Veleners subside primarily on agriculture, crafting and animal husbandry. The province is practically deprived of all natural resources. It contains a great deal of forests, wetlands and cultivated woods, though the greatest part of it is covered in swamps and bogs (...)
Lands of the North: Velen

Shrines to Melitele, the goddess of harvest, hearth, and fertility, are a frequently encountered element of the Temerian countryside. Simple statues carved of wood depict the goddess in one of three forms: Mother, Virgin, or Crone. Around these altars, local peasants place small offerings of food and drink in tribute, and light modest votive candles and lamps. Meanwhile, in Velen another religion has taken root, one which calls for prayers to be addressed to the Ladies of the Wood.

This cult's shrines show evidence of syncretism between the faiths: Melitele the Crone has become one of the Ladies, an old woman with sagging breasts and an open mouth full of crooked teeth. These statues are often stained with blood, both the caked residue of past sacrifices and the still-warm traces of new ones. Both religions are very old, dating back almost to the time of the first men, and so the design of the shrines conveys a somewhat archaic look. The rough-hewn wooden carvings recall ancient Slavic depictions of the gods.[5]

In addition, priests from Novigrad and witch hunters are spreading belief of the Eternal Fire and its church while others, believing those in Velen needed to let go of their religion, sought to actively destroy the religious statues of Verna. 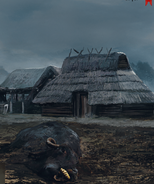