Vergen Besieged is a quest in Chapter 2 of The Witcher 2: Assassins of Kings.

This quest automatically begins after you lift the curse, all the shops and craftsmen become unavailable so it is advisable to finish up last minute shopping and crafting before going into the mist the last time. You begin in Philippa's quarters and you need to go talk to Zoltan at the front gate of Vergen. If you spared the trolls' lives, they will appear to help you defend Vergen (although it does not affect the outcome nor do you have more than the most fleeting opportunity to see the trolls in action) After a short cutscene you are given the task to open the hot oil valves. Go up the stairs and go straight for the mechanism between the second and third oil reserves. The enemies that are here never run out so don't bother clearing them out.

After another cutscene retreat to the second gate and defend the walls. Several waves of soldiers climb up the wall. They don't put up much of a fight since you will have allies to distract them. After finishing off the enemies follow Saskia down to the mines. Kill three mercenaries in the first room, another four mercenaries in the next room, three rotfiends, then after a cutscene you are faced with six soldiers and a mage. The mage can teleport around the battlefield and can cast Quen II and lightning. You can leave the soldiers to Saskia and focus on the mage. When you get the mage's life to less than half another cutscene will happen where you learn something about Saskia.

Afterwards go back to the walls. Follow Zoltan as he closes the gate. Then defend the walls again in exactly the same fashion as before. Another cutscene completes the battle.

Following the battle, Henselt surrenders and negotiates with Saskia.

Geralt and Iorveth can follow Philippa, but she eludes them in the end, taking Saskia with her. 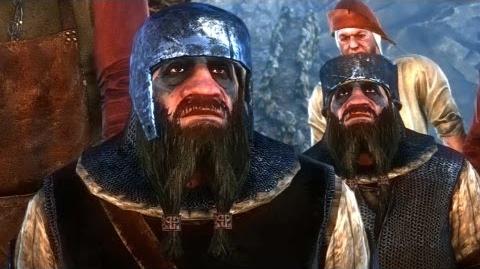