Edit
watch 02:59
Metroid Dread - The Loop
Do you like this video?
Play Sound

According to legend, Vetala lives in the city cemetery in Vizima; he is a highly intelligent creature whom other necrophages respect

Immune to common poisons and resistant to knockdown attempts; tough skin and thick muscles protect him from blows

Tries to knock down victims and eat them alive

Graveir bone
white vinegar
cadaverine
An intelligent, talking ghoul is a rarity. And yet from time to time one encounters a specimen that ruins the reputation of the rest of the species by soliloquising over dead bodies and engaging in cogent discussions with witchers. Rumour has it that evolution equipped Vetala with a dangerous weapon: he can talk people to death. That rumour is not necessarily an exaggeration.

He can be found feasting on remains, in the ruined church in the center of the cemetery in Chapter III and again in Chapter V in a safe house in the Temple Quarter.

Vetala is a mythical beast, invented by the common people. Tales about him are typical examples of urban legend, spread by word of mouth, which grow increasingly fantastic with each retelling. Vetala is believed to be an intelligent ghoul or graveir who lives in the city cemetery as the absolute ruler among scavengers. Not only does Vetala speak the human language, he is also known for his sophisticated manners. Vetala is said to prefer corpses over living flesh. He rarely attacks humans and demonstrates unusual courtesy on the rare occasions when he does.
I met a talking ghoul, a real freak of nature.
If Geralt decides to kill Vetala:

I decided to kill him, for despite his eloquence he was still a monster, a threat to humans. And I'm a witcher.

During the secondary quest "Harassing a Troll" in the third game, if Geralt chooses the first option when talking to Boris the rock troll, Geralt will mention that he once met a talking ghoul. 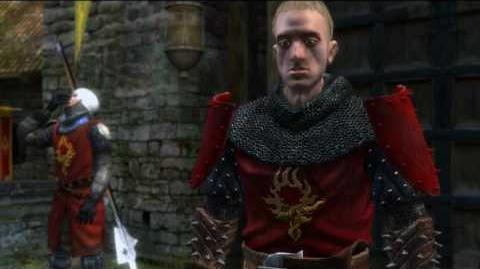 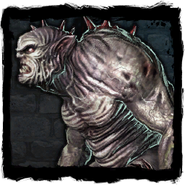