Witcher Wiki
Register
Don't have an account?
Sign In
Advertisement
in: Knights, Dragons, Characters in the comics,
and 5 more
English

Sword of Destiny
Blood of Elves (mentioned)
Something Ends, Something Begins

The Witcher 2: Assassins of Kings (mentioned)
Thronebreaker: The Witcher Tales
Villentretenmerth (Common Speech: Three Black Birds) was one of the only two known Golden dragons in the entire history of the Continent. As he loved living amongst other creatures, and was highly skilled in the art of polymorphism, he was able to assume many forms and travel incognito. One of his most well known forms is that of Borch Three Jackdaws.

Geralt first met him when he posed as a knight accompanied by two Zerrikanian women, Téa and Véa, to whom he referred as his "weapons". He never carried conventional weapons of any kind, saying that he could not, but never elaborating. He was the father of another famous dragon, Saesenthessis.

Not much is known about the early years of Villentretenmerth but he was known for always traveling and never staying in one place for too long. He used various forms during these travels to seamlessly blend in but he was also known to occasionally travel in his true form. On one such travel he met a green dragon female known as Myrgtabrakke, whom he took as his mate. After some time together, he left her and continued traveling.

Meeting with the witcher[]

Villen, under the guise of Borch, met the famous witcher Geralt during one of his contracts. The witcher slew a basilisk, and Borch, accompanied by his two Zerrikanian bodyguards, Téa and Véa, intervened before the folks who had hired the witcher could pilfer his bags. He invited Geralt back to a nearby inn, using the opportunity to question the witcher on his personal philosophy and was pleased to learn Geralt didn't hunt dragons, because, as Geralt explained, they don't threaten humans; rather, it is humans who hunt them. He debated with Geralt the possible existence of a golden dragon which would be a mutant but was rebutted when Geralt reluctantly stated "Mutants are sterile, Borch. Only legends permit what nature condemns. Only myths can ignore the limits of what's possible." The two enjoyed a long conversation and a good meal before finishing up and turning in for the night.

Not long after, it became known that there was a large dragon in Barefield and a great hunt was preparing.

Hunt for a Dragon[]

The group decided to join the hunt so they began their journey to Barefield. When they arrived at the border they found out that the place was closed due to the hunt.

Looking for a way in Geralt found none other then his long time friend Dandelion who told the group everything he knew. Next day the group was able to get through and they joined the hunting party.

The hunting party was full of interesting individuals - the famous dragon hunters Crinfrid Reavers, Dwarven master Yarpen Zigrin with his company, noble knight Eyck of Denesle, and mages Dorregaray and Yennefer. The party was commanded by Prince Niedamir and guided by a peasant named Sheepbagger.

Borch immediately recognized tension between the witcher and the sorceress Yennefer but he kept that to himself just like the real reason he wanted to join the hunt - the dragon in question was none other then his Myrgtabrakke, a female he'd been with some time ago.

Borch assumed the role of an observer and simply watched the events unfold and tensions build over the group's different ideas about the dragon. After awhile, he abandoned the group to take care of his own business. In his absence the group was caught by a rockslide, throwing the witcher and the sorceress off the cliff. They were eventually saved by Eyck, who threw them a rope.

After this, the group's situation grew worse as they began to constantly argue. During one such argument, however, they were interrupted by the loud roar of a dragon and, to their great surprise, it wasn't a green dragon that did it but a rather large, golden one. Though the group was in awe and could not believe their eyes at first, they eventually decided to continue on and kill the dragon.

Before they could begin the hunt however, the dragon - using telepathy -gave them two options: leave, or stay and fight in a fair duel. This was a perfect change for the honorable sir Eyck, who did not hesitate for a moment and attacked the dragon. Villentretenmerth proved to be extremely agile for one of such size and quickly disposed of the knight, sending him and his horse flying across the valley.

The dragon's quick victory caused the prince to abandon the quest and the Reavers to change their plan regarding the killing - they now wanted to kill the dragon themselves. This caused the group to be divided in two - those who wanted to kill the dragon and those who wanted to prevent it. The latter group consisted only of Geralt, Dandelion, and Dorregaray, and were thus easily overpowered by the others, tied up, and left behind. Yennefer seemingly takes the side of the Reavers and Yarpen's company but she quickly turns on them only to be knocked off and have her hands and fingers bound as well.

Meanwhile, Villentretenmerth had observed all of this with rising impatience. When the Reavers and Yarpen finally attacked, the dragon was already charging and, though the hunting group made an impressive entrance into the fight, they were quickly defeated by the powerful beast. Eventually it became clear what the dragon had been furiously guarding: his and Myrgtabrakke's newborn hatchling.

Soon after Villen defeated the attackers, the local militia lead by Sheepbagger arrived. They proved to be more than a match for the dragon and, by their sheer numbers, were able to incapacitate him. Fortunately for him Yennefer managed to free herself thanks to Geralt and used her spells against the mob while the two Zerrikanian women appeared and cut their way though the crowd before eventually freeing Villen, who promptly took off and killed Sheepbagger.

After this Villen ordered the dwarves to attend to the wounded Reavers and forbade Véa to attack Yennefer. When the fighting stopped, he assumed a human form again and revealed to all that he was actually the knight Borch Three Jackdaws. He then thanked Geralt and Yennefer for their help and made a rather cryptic comment about their relationship before changing back to his true form and flying off with his newborn.[1]

He then spent many years raising his daughter, Saesenthessis. He taught her to care for others, to see them as equals, and to value freedom. Unlike him however, she was a crossbreed between a green and golden dragon and thus her abilities in polymorphism were very limited. After some time Villen left her on her own, as is common amongst dragons.[2]

After the Northern War II, Borch was seemingly "captured" by a mercenary unit who were paid to bring him to the Queen of Zerrikania. In one of the taverns, he told them a long tale about Queen Meve's deeds during the guerilla warfare.[3]

Not much is known about him after this. Many years later, during the Kaedweni occupation of the Pontar Valley, Geralt met his daughter under the guise of Saskia.[2]

Borch as seen in graphic novel 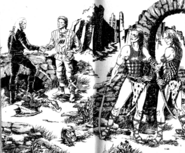