This hermit was formerly a soldier of King Henselt's army, who took part at the war three years earlier. He also witnessed the execution of Sabrina Glevissig, with whom he became obsessed. He claims that Sabrina was a martyr and a saint, who enlightened him and showed him the path to the light. Then he started to spread the belief among soldiers, saying that Sabrina would protect them while in battle.

He has surrounded his hut with a circle of candles, which curiously keep monsters away. He claims that it is Sabrina's blessing, but most likely it is that creatures do not like the fish oil smell.

Talking with him, Geralt learns that the Visionary is the same soldier who speared Sabrina's body while she was on the stake, killing her. Unfortunately, this spear is lost.

During my travels I've seen many prophets, preachers of "divine truth" who frothed and gibbered foretellings about the end of the world, depravity of women, lechery of kings and rising taxes. The Visionary extolled the martyrdom and sanctity of Sabrina Glevissig, and these ideas had become the foundations of a local cult. Supposedly the sorceress' favor made him invulnerable and safe. However there was no way to decipher how much truth lay in his tales.
If Geralt takes Roche's path:

There was a relatively simple explanation for his ardent faith. The Visionary was none other than Yahon, the soldier who had ended the sorceress' suffering by piercing her with a spear during the execution. That event had changed his life and guided him down the path to prophethood.
One theory to explain his invulnerability ascribed warding qualities to the suet used to make his candles. Indeed, their scent would keep even ghouls at bay. 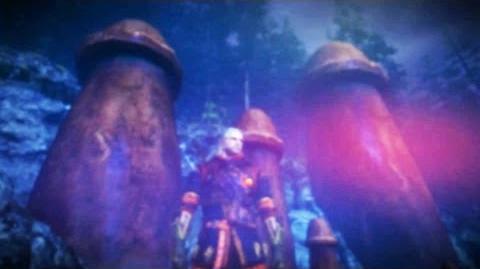 The Path to Vision (The Witcher 2) Full HD