He was present at the banquet in honor of Pavetta's coming of age, when the Urcheon of Erlenwald appeared.[1]

In 1263, during the First Northern War, he survived the Slaughter of Cintra and afterwards led a group of emigrants and refugees based in Brugge who were called the "Cintrans in armed resistance". They were waiting for news of Calanthe's granddaughter, the lion cub of Cintra, Ciri.[2] 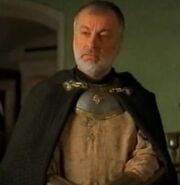