Vivienne de Tabris was a woman from Toussaint and the lady-in-waiting to Duchess Anna Henrietta. She served as the patron in the 1275 Grand Knights Tournament and was the subject of a contract given by her suitor, Guillaume de Launfal.

Before Vivienne was even born, she was cursed by an unknown creature who, envious of her parents' happiness while pregnant with Vivienne, declared the couple was trespassing in its forest and demanded they pay. The couple had nothing to give though, so the creature decided it would take their unborn daughter by casting a curse that twisted the mother's earlier words about how she wished her daughter would be as beautiful as the orioles in the forest. However, Vivienne was born a healthy, normal looking baby and soon this encounter was forgotten until she was 15 years old and the symptoms of the curse first manifested. As time went on, the curse got worse and worse, with each passing year making her look more and more bird-like, and going from just happening every full moon to every waking moment so that she had to resort to wearing strong, magical oinments to hide it. She also learned that the glade where her parents once hung out had a pond that magically made her look normal again, at least for a short duration.

If Geralt helps out Guillaume: when the witcher entered the tourney and she heard of a certain white-haired man poking around her tent, she grew suspicious and thought Geralt was there to kill her. After trying to get him to lose his way in tracking her, she eventually led him to the special glade, informing him if she was to die, she'd like to die there. However, Vivienne quickly learned that not only was Geralt not going to kill her, but actually wanted to help cure her if possible.

Geralt offered two ways to lift the curse: the first involved transferring the curse to a willing participant, and though it wouldn't go away, the curse would be severely weakened on the recipient. However, Vivivenne refused this option outright, not wanting anyone else to live with even a weakened version of the curse. The second involved trapping the curse inside an oriole egg, at the risk of leaving Vivienne with the average life span of 7 years. While it would drastically shorten her life, she saw this as her only true freedom, even if it was just for 7 years.

If Geralt uses the egg ritual: Vivienne, finally free from her curse, soon left Toussaint and took full advantage of being able to move freely at night once more. She visited Pont Vanis in Kovir to see a late night mummers play and went on to attend Baroness de Cordelle's ball, staying until dawn. She later visited Novigrad and took in all the sights before making her way to Skellige. Seven years later, in the Kaer Trolde harbor she died, as the result of her shortened life.

If Guillaume offers to help her: at first reluctant, Vivienne finally saw that Guillaume really understood and wished to sincerely help her and she promised that whatever happened, she'd be there as thanks. Geralt performed the ritual, successfully removing the curse from Vivienne and Guillaume received a weakened form. The two later became a couple and stayed in Toussaint.

Vivienne de Tabris was Anna Henrietta's lady-in-waiting. She was a tight-lipped, secretive, inaccessible person, but her beauty fascinated men. Geralt saw proof of this when he took a contract from Guillaume, who was in love with her and suspected she might be afflicted by a curse. In order to get an audience with her, Geralt had to take part in the knights' tourney, where Vivienne was acting as patroness.
By following Vivienne and examining the evidence, Geralt discovered Guillaume was right. Vivienne had indeed been struck by a powerful curse before she was even born. This curse caused her to turn into a bird whenever the moon was out. Geralt listened to the story of the curse, then offered to try to lift it. He warned her that this would not be a simple matter. The curse could be transferred to another, but Vivienne did not want to agree to that. It could also be removed entirely, but then it was possible Vivienne would only have a few years left to live.

If Geralt tells Guillaume about the curse:

Geralt decided to tell Guillaume what he had learned. Guillaume offered his help in lifting the curse – and declared he was willing to take that burden upon himself.
Thanks to the information Geralt had gathered, Guillaume convinced Vivienne to let him take the curse upon himself. According to Geralt, the spell would have much weaker effects once transferred. Vivienne believed Guillaume had the best of intentions and decided to trust him.
The three of them performed the ritual, lifting the curse from Vivienne. As for Guillaume, he noticed no immediate changes.
If Geralt checks in with the couple later:

Guillaume and Vivienne grew close. The curse caused the knight to grow feathers on strange parts of his body, but that did not bother him overly much. As for Vivienne, she was rather fond of them.

If Geralt does not tell Guillaume about the curse:

Geralt kept the information Vivienne had confided to him secret, even though Guillaume was determined to help her any way he could.
Guillaume tried to convince Vivienne he only wanted what was best for her, but she prefered to remain independent. She and Geralt conducted the ritual together, lifting the curse.
Vivienne felt free for the first time in her life. She decided to make maximal use of the time remaining to her and set out to travel the world.

Vivienne in her tent at the Tourney 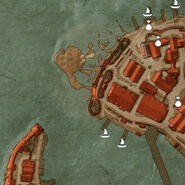