Witcher Wiki
Register
Don't have an account?
Sign In
in: Settlements, Vizima, The Witcher locations,
and 6 more
English

The World of the Witcher
Vizima, Wyzim, or Wyzima[1] (Polish: Wyzima) is the capital city of Temeria, one of the Northern Kingdoms.

Vizima once was the location of an ancient elven settlement, which upon the great eastern expansion of humans approximately five hundred years ago, was abandoned by the elves and in its place humans built this city.[1][2]

Around 1266, between the First and Second Northern War, Foltest introduced ius stapulae to Vizima, blocking all merchandise routes with inspection sites around the city, and seizing any Redanian or Nilfgaardian goods to be sold within the city.[1]

The coat of arms present in the infobox, conceived by Ruttou and recreated by SMiki55, refers to historical arms of King Dezmod and the subsequent Temerian rulers.

Located on the shores of a beautiful lake, Vizima is a walled city and the main setting of The Witcher computer game. The city is under a state of quarantine for the duration of the game, so movement about town in general is limited most of the time, and totally restricted, for some particular areas.

Vizima, the capital of Temeria, is the largest city in the kingdom. It is located on the shore of Lake Vizima, at the intersection of important trade routes, one of which is a waterway. Owing to a developed network of roads, the city draws considerable profit from trade. By King Foltest's order, the city is governed by Burgomeister Velerad. Vizima is divided into three large districts. The poorest one is the Temple Quarter, where Saint Lebioda's Hospital and the Cloister of the Order of the Flaming Rose are located. The Trade Quarter is home to the wealthiest and most important inhabitants, and both the town hall and the main marketplace are situated there. The oldest part of the city, Old Vizima, has been recently converted into a ghetto for non-humans.
I acquired a pass which allows me to pass through the gates into the city in spite of the quarantine.

This restriction of movement is achieved through guarded gates which separate the various areas. There are nine gates in total. Six main gates:

Three internal gates also restrict movement between areas of the city, at least for parts of the game:

During the Prologue, Chapter I and Chapter IV, the city proper is inaccessible, but the main story takes place within its confines. The city and surroundings are divided into the following locations: 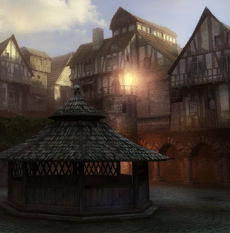 Vizima is only mentioned in the The Witcher 2.

Lying where important trade routes converge, Temeria's capital sits picturesquely on the shore of Lake Vizima in the valley of the Ismena River, a tributary of the Pontar. The city is divided into four teeming quarters, which are home to thousands and host travelers from all corners of the world. The Royal Palace and court are both found here, and the city boasts many markets, temples, forges, shops, banks, workshops, inns and brothels. Since our story does not concern Vizima directly, I will end my description here and urge those interested to consult other sources.

Following the regicidal events of the previous game, Nilfgaard invaded a weakened Temeria, subjecting its capital city to occupation. Residency of the Royal Palace has been taken up by Emperor Emhyr var Emreis himself, who personally invites Geralt to visit. Geralt can only access certain parts of the inner residence, namely, all the areas from the first game and one new area off the garden.

Bridge to the city

appearance in The Witcher Adventure Game