Vizima Confidential is basically the framing quest for Chapter II of The Witcher. It spawns and is fed by several other quests in that chapter of the story.

In this quest, with the help of the local private investigator Raymond Maarloeve, Geralt will need to indulge himself in a lot of investigative works to hopefully uncover the real identity of the man behind local Salamandra activities, as well as unearthing the truth regarding the possible collaboration with Salamandra for a total of 6 suspects:

This quest starts after Geralt decided to visit a local private investigator recommended by Siegfried, Raymond Maarloeve. After all, the witcher just barely regained his freedom in an unfamilar city, with the only suspect being the head of the local law enforcement. He could definitely use an experienced helping hand.

From the detective Geralt learned that the city guard recently arrested a man wearing Salamander pins, the so called Crown Witness. Needless to say, an interrogation could prove extremely valuable to the investigation effort. Now the witcher just need to find out where the city guard is holding the prisoner.

Follows the quest The Crown Witness to its completion, the witcher now have two new leads: Ramsmeat, and Kalkstein.

Reported back what he just found out, Geralt now sets out to gain Kalkstein's trust by Raymond's advice, leaving Ramsmeat to the detective. After getting the information from the two books requested by Kalkstein during A Mysterious Tower, Geralt figured that the alchemist must have trusted him enough now. Time to report back again.

Yet this time the witcher found Raymond under assault of some of the best assassins sent by Salamandra. Geralt intervened in a heartbeat and saved the detective's life, whom decided to lay low for a bit in light of the attack. Before leaving, He left Geralt with a List of suspects, giving our hero three new suspects to question: Leuvaarden, Thaler, and Vivaldi.

After the necessary questioning is done, a messager boy approached Geralt, informing him that Raymond asked the witcher to come for a meeting.

It is at this point the possibilities of the quest really starts to emerge. And things gets real interesting, too.

With Raymond back into the picture, two parallel but not mutually exclusive directions lie ahead of the witcher:

But regardless of what Geralt chose to do next, what really matters is when does the witcher get hold of a critical knowledge that topples the entire investigation so far:

''Major Spoiler: The detective coming out of his lay-low period is not the same one as before, but Azar Javed himself!

For simplicity and accuracy, this critical knowledge will be refered to as the "Grand Truth" from this point.

As the de facto objective of this stage of the investigation, it is best to learn the "Grand Truth" as soon as possible. Currently there are 3 ways of achieving this:

If Geralt managed to learn the "Grand Truth" by any means, our hero will have to find a way to lure Azar out of his own territory into a trap. This involves the quest What Lies Beneath, where ironically, the witcher finds himself an ally out of the No.1 suspect: Kalkstein. The two agreed to lure Azar to the tower in the swamp for the final confrontation.

If Geralt didn't realized he's been duped until it's too late, which means the autopsy in Anatomy of a Crime ended up misguided and as a result the witcher has killed Ramsmeat. Then Geralt will be informed that in order to get to Kalkstein, he will have to lure the alchemist to the tower in the swamp.

Either way, the quest enters its final stage: the opening of the tower.

With the investigation finished, Geralt must now gain access to the tower in the swamp in order to lure the person he believes to be the culprit behind Salamandra activities around Vizima. This calls for the completion of A Mysterious Tower.

After the tower is open to the world once again, Geralt meets with the detective at the foot of the tower. Depending on whether did he learn the "Grand Truth", the witcher emerges either as the intellectual superior who sees through his opponent's every scheme, or the utter fool who has been duped to the very end.

As the quest comes to an end, Chapter II of the story concludes as well.

Money for the Detective[]

This only happens if Geralt refuses to mention Azar Javed to Raymond.

I have my first clues about Salamandra. The City Guard is holding an important witness I need to speak to... I should have a word with the jailor Jethro. I must question the witness being held by the city guards. I should talk to Jethro. (500 XP)

It seems that the Salamanders have a secret agent who set a trap for me. I must find out who he is. First I should interrogate the prisoner being held by the city guards. I must interrogate the witness.

There is strong evidence against Ramsmeat and the alchemist Kalkstein. Raymond will take care of the former. I must gain the alchemist's trust. In order to do so, I have to get an important assignment from him. I must go to Kalkstein the alchemist and gain his trust.

The private investigator decided to lay low. He gave me a list of suspects - I should uncover them as soon as possible, while Raymond attracts the Salamander's attention. I must cross-question all the suspects. I'll start with Ramsmeat. (

I spoke with Ramsmeat, but his confession alone is insufficient. To get a full picture I need to interrogate other suspects. I should question Thaler the fence.

I spoke with Thaler, but his confession alone is insufficient. To get a full picture I need to interrogate other suspects. I should question the merchant Leuvaarden.

I spoke with Declan Leuvaarden, but his confession alone is insufficient. To get a full picture I need to interrogate other suspects. I should question Ramsmeat, the boss of the thugs.

I've heard the stories of Leuvaarden and Thaler. Now I need to interrogate the thug to get a full picture. I need to question Ramsmeat.

I've heard the stories of Ramsmeat and Leuvaarden. Now I need to interrogate the fence to get a full picture. I need to question Thaler.

I've heard the stories of Ramsmeat and Thaler. Now I need to interrogate the merchant to get a full picture. I need to question the merchant Leuvaarden.

Raymond sent a messenger - he wants to meet me as he has gained some new information. I wonder how he will react to my discoveries. I must meet up with Raymond.

Autopsy implicated Kalkstein: I told Raymond about what we found during the autopsy. The evidence points to Kalkstein. The detective needs some time to analyze the evidence.

Autopsy implicated Ramsmeat: I told Raymond about what we found during the autopsy. The evidence points to Ramsmeat. The detective needs some time to analyze the evidence.

I told "Raymond" that I discovered nothing during the autopsy. I will not tell him that he is Azar. I must find a way to lure Azar into a trap.

No autopsy is necessary:

There is no need to perform the autopsy. I know that Azar Javed is pretending to be Raymond. I will go to him, pretend the autopsy proved nothing and see what happens. I'll try to lure Azar, posing as the private eye, into a trap.

I told "Raymond" that I discovered nothing during the autopsy. I will not tell him that he is Azar. I must find a way to lure Azar into a trap.

Geralt is in the dark:

I promised Raymond to eliminate the boss of the Salamander's armed forces - Ramsmeat. I have to prepare well, as he seems to be a tough opponent. I have to kill Ramsmeat.

I told Raymond that I had killed Ramsmeat. He is going to wait for me near the tower. I must lure Kalkstein to the tower in the swamp.

Raymond gave me a Sephirah which forms a part of the key to the tower. All that remains is to take what's inside the tower and we'll get that bastard Kalkstein once and for all. I have to open the tower.

I have found the magic treatise that Kalkstein desired so badly. For years, it lay safely hidden away in the tower in the swamp. Azar is in for an unpleasant surprise. I must prepare to face Azar Javed.

Azar, who impersonated Raymond, is behind all this. I must lure him into a trap. I will tell "Raymond" that I killed Ramsmeat.

I told Raymond that I had killed Ramsmeat. He is going to wait for me near the tower. I must prepare to face Azar.

Everything is going smoothly. The fake private investigator gave me his Sephirah. Now I can stop pretending. I must get inside the tower to defeat the false Raymond.

I have found the magic treatise that Azar desired so badly. For years, it lay safely hidden away in the tower in the swamp. I must prepare to face Azar Javed. 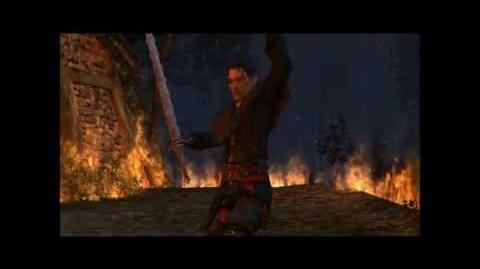