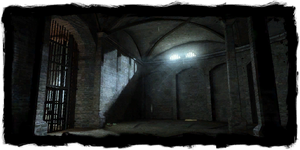 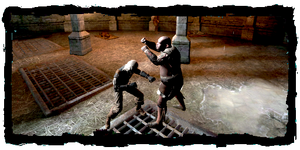 The dungeon is where those criminals unlucky enough to fall into the hands of the City Guard are kept. Prisoner turnover in the jail is relatively high. Some are released, usually to return after a while, while others are executed on the scaffold. Captain Vincent Meis of the City Guard is the jail's warden. His assistant is the jailer, Jethro. The dungeon affords access to the sewers, which run under the entire city of Vizima.

There are two cells. The first, a large holding area with many (apparently political) prisoners, and the second, a more private cell, where the Professor is initially locked up. There is also a secure area where prisoner effects are kept during their period of incarceration. This is where Geralt can pick up his gear after his first excursion through the sewers. There is also a large central area where the jailers perform their duties, a grate in the middle of the floor leads to the sewers.

It is also the scene of Geralt's third official fistfight (second if you missed the tutorial with Eskel). He must fight the loudmouth in the dungeon for the "privilege" of taking on the cockatrice which is currently stalking the sewers, securing his freedom from incarceration.

The dungeon also features in the Side Effects premium module. 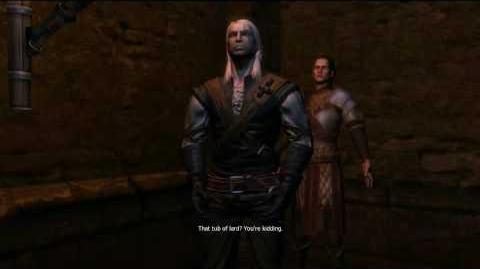 The Witcher - Geralt in dungeon
Retrieved from "https://witcher.fandom.com/wiki/Vizima_dungeon?oldid=512951"
Community content is available under CC-BY-SA unless otherwise noted.