Witcher Wiki
Register
Don't have an account?
Sign In
Advertisement
in: Vodyanoy, Races, The Witcher Chapter II,
and 2 more
English

Vodyanoy, also known as the fishpeople or fish-eyed creatures, are an intelligent race living in underwater cities at the bottom of the Great Sea, where their civilization is most advanced, as well as the Pontar river and its tributaries.

They share the ocean with nereids and merpeople, the latter of which they treat with the utmost respect and occasionally fight.

Vodyanoy are scaly humanoids with muscular legs that allow them to run nimbly even on dry land. They have spherical bulging eyes described as iridescent and cold, betraying no emotion. On the other hand, their immensely broad maws full of conical teeth tend to resemble a cruel smile. Vodyanoy also have huge combs on their heads which make them look larger.[2]

Living deep underwater, vodyanoy absorb oxygen through gills which get dilated when exposed to air.[2] To survive on the surface for longer than few minutes the vodyanoy wear breathing masks.[1]

Inhabiting entirely different conditions, vodyanoy developed an advanced civilization unlike any other. They know the arcana of metalworking, utilizing them to forge swords, spears, axe-like weapons and helmets. Vodyanoy are also fairly efficient masons capable of not only building cities but also vast steps which lead to them.[2]

They worship many deities and take religion very seriously. Two of such deities were the powerful Lady of the Lake and her enemy Dagon, a cruel being awaken and killed in 1270. Land dwellers know little about the majority of these cults and what is known inspires fear in them. Vodyanoy hold their priests, capable of using magic which they believe to come from deities of the deep, in high esteem. Vodyanoy are also worshipped themselves as the Water Lords by a small human cult.[1]

Developer CD Projekt's characterization of the vodyanoy taken from the monsterbook, which was enclosed with the Collectors Edition of the computer game The Witcher for Poland, Hungary, and the Czech Republic:

The race of the underwater creatures described in the short story 'A bit of Devotion' is undoubtedly intriguing: a civilization thrives in the depths of the sea, developing in parallel to those on land. This motif provided an opportunity to tell a tale of two worlds colliding. In the game, relations between the vodyanoi (inhabitants of the Underwater City whom humans contemptuously refer to as "fishpeople") and the villagers of Murky Waters are tense. A mysterious deity named the Lady of the Lake and, of course, our protagonist Geralt of Rivia, step in to mediate.

The sketches depict members of two vodyanoi castes as well as acolytes of the menacing water god Dagon. The artist concentrated on clothing and accessories in an effort to emphasize the distinctive nature of the underwater civilization. The priest wields a staff and wears a high hat with straps of leather falling on his shoulders — objects resembling the staff, miter and vestment of a bishop. His mask and the bracelets on his hand emphasize that the vodyanoi know metallurgy and view metal as a rare and valuable resource. The remaining elements of this ceremonial outfit feature more common materials: his belt is made of oyster shells and stones, the straps of his vest of leather, his stone-encrusted breast-plate of wood. The stones have a religious significance connected with the cult of the water god known as Dagon.

The vodyan warrior wears a lighter outfit. His armor does not restrain his movement, enabling him to fight ably both underwater and on land. As vodyanoi absorb oxygen naturally only from water, he wears a mask that allows him to breathe on land. Modeled after old gas masks, this breathing apparatus grants the warrior and all vodyanoi a singular appearance.

The straps and plate on the warrior's chest are also lighter. They are not armor, but (as in the case of priests) religious objects. The netting evokes connotations with water and was probably looted off of fishermen during a raid.

In the early development stages, vodyanoi — as opposed to other monsters — were supposed to use weapons, hence the harpoon in the sketched warrior's hand. This idea was ultimately abandoned: even though they are thinking creatures, fishpeople use their claws in combat.

The third sketch depicts a vodyan dissident and worshipper of the menacing water god Dagon. The schismatic and his comrades emphasize their autonomy by wearing a different mask, one modeled after a knight's helmet. The breastplate is larger than that worn by warriors because Dagon's acolytes consider themselves to be priests.

"The ocean is vast, Agloval. No one has ever seen what is there, beyond the horizon, if there is anything there at all. The ocean is larger than any wilderness to which you have exiled elves. It is less accessable than any mountain or valley where you might have massacred bobolaks. And there, at the ocean bottom, lives a race that uses weapons, knows the secrets of working metal. Beware, Agloval. If archers begin following the divers to the surface, you will provoke a war with something you know nothing of. The thing you wish to disturb may prove a hornets' nest. I advise you to leave them the sea; the sea is not for you."
Sword of Destiny (UK edition) 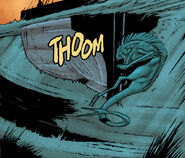 early sketch of a vodyan warrior