Female (portrays self as)

Voleth Meir or Deathless Mother is a demon that feeds on pain. They generally take on the form of an elderly human woman but changes based on who they're interacting with. In reality, she's a dark elf and part of the Wild Hunt.[1]

Like other monsters, demons appeared on the Continent during the Conjunction of the Spheres and the first witchers were hired to deal with Voleth Meir, who they subsequently entombed in her hut beneath an elven ruin in the North.[2] Centuries passed and all but the witchers forgot about the locked up demon.

Despite her entombed state, Voleth Meir was able to reach out in dreams to certain individuals. When Ciri's powers revealed themselves and she brought down a monolith during the Slaughter of Cintra, this awoke the ancient demon once more who realized the princess' screams at the monoliths opened portals into the other spheres, meaning finally a way home for Voleth Meir.[3]

The demon then began to visit the dreams of Francesca Findabair, Fringilla Vigo, and Yennefer of Vengerberg in 1264 to try and break her free. Originally appearing as a different hooded figure to each, with Francesca believing it was Ithlinne, Fringilla believing it was Emperor Emhyr var Emreis, while Yennefer's was an unknown person, she was able to get them to find her sealed off sarcophagus and recite the incantation to get inside and meet her.

Pulling each mage into a separate conversation, they all soon realized it wasn't who they thought it was but the demon offered to give them what they "deserved". Francesca and Fringilla accepted with conditions, with the elf becoming pregnant with the first pure-blood elf in years in exchange for living among humans and Fringilla given power by encouraging her to use the elves to help Nilfgaard. Yennefer however, refused to accept the offer to gain her magical powers back after losing them at the Battle of Sodden Hill and the demon antagonized her, remarking she'd keep making her hurt until Yennefer begged her to end it. With that, she then let all three go back into the world.

Despite letting them go, Voleth Meir continued to taunt Yennefer telepathically in situations where her magic would have helped her out of a situation, though Yennefer continued to resist. However, when the sorceress was finally captured by guards in Oxenfurt and was being held to wait execution, she finally recited the incantation to see the Deathless Mother and was teleported away to her hut and out of the guards' reach. The demon then told Yennefer she could have Chaos again once she found Ciri and brought her to monolith she'd toppled in Cintra. Voleth Meir still kept tabs on the others though and when she saw Fringilla feeling her control over the Nilfgaardian generals slipping, was able to convince the sorceress to murder all the conspirators except for Cahir, who she let live so he could tell Emhyr about the others conspiring against her. As Fringilla killed the rest, the demon fed on the pain and hatred.

Soon after, Yennefer managed to find and bring Ciri to the toppled monolith's location, but just as they reached it she had a change of heart on realizing how much Ciri meant to Geralt. However, in the capital city, an assassin sent by Emhyr[3] killed Francesca's newborn daughter,[2] causing the elf so much pain and grief that it fed Voleth Meir enough to free herself from her hut and get back out into the world without needing Ciri to go to the door.

While no longer entombed, Voleth Meir still wished for a way back home and so sought out and possessed Ciri as she made her way to Kaer Morhen with Jaskier. Once in the keep's safety, Voleth Meir took hold, putting Ciri under a delusion of her past life in Cintra's court while the demon began to make its way through the keep, silently killing the sleeping witchers. However, as she went to kill Vesemir, Geralt and Yennefer appeared and Geralt realized while it was Ciri's body, Voleth Meir was possessing her. The demon ran off to the Great Hall and the surviving witchers soon found her and prepared for a fight.

However, Voleth Meir revealed a shocking revelation. Using Ciri's powers, she screamed at the medallion tree, cracking it in half to reveal a monolith had been inside it. Using this and more screams, she began to open portals and allow new versions of monsters through to attack and kill the witchers while Geralt tried to break through to Ciri. During all this, Jaskier tried to get active jasper to Geralt under Yennefer's instructions to try and free Ciri while Vesemir, desperate to stop anymore witchers from dying, tried to kill Ciri in the hopes it'd stop the demon. He eventually managed to stab her while Geralt was occupied by a monster but the demon revealed it could magically heal itself.

Seeing the jasper and connecting Voleth Meir's remarks about them all feeling so much hatred and pain, Geralt realized what Yennefer had meant and got all the witchers to stop and let go of trying to kill, removing the demon's ability to feed her powers off of them. However, the demon still refused to leave Ciri, making Geralt realize her hut that she'd embodied was burned and thus couldn't escape even if she wanted to as she needed a vessel in their sphere. Yennefer then offered herself up instead for the demon by slitting her wrists and, with Ciri having managed to awaken from the illusion, pushed Voleth Meir out and to Yennefer.

While Voleth Meir slowly took possession of her new host, Ciri used her training to teleport herself, Geralt, and Yennefer to Voleth Meir's native sphere. Finally back home, Voleth Meir left Yennefer's body and instead linked up with the Wild Hunt that was galloping through the land to get to Ciri, but Ciri managed to get her and the others back home before they could get her. 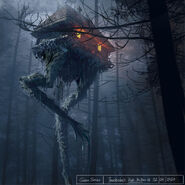 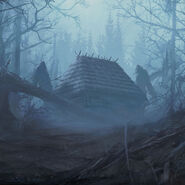