Cookies
Gingerbread
Gingerbread man
Magic dust
Poisoned apple
Bone ashes
Grave hag's ear
The Wicked Witch is one of the inhabitants of the Land of a Thousand Fables in the Blood and Wine expansion.

Once upon a time, there was a wicked witch. Every day after supper she'd drink a glass of freshly-squeezed corpse juice...
– Karl Hrimm, writer of children's fables
Though evil witches are often considered creatures born of the overactive imaginations of fabulists and mythologists, cartoonish characters only a child would ever be frightened of, there are accounts of men who claim to have happened across one of these improbable beings. All these accounts agree that the witch not only did in fact eat men, but had mastered the cooking of humans to a fine art. They are said to be particularly fond of children's liver fried in butter and served in a saffron sauce, balsamic vinegar-marinated fingers roasted to a golden crisp and, yes, even freshly-squeezed corpse juice. It should be noted here that all the above-mentioned witnesses who swore they saw such a witch were patients of the Ellander Institute for the Mentally Ill, thus the veracity of their testimony is highly debatable.

The Wicked Witch has a broom in her possession which allows her to become airborne. She will use this ability to attempt to douse Geralt in poisonous soup from above, while keeping herself shielded by a protective magical bubble. While the Witch is within this bubble, any attempts to breach it are futile; signs, bombs (even dimeritium ones), and crossbow bolts are useless against it. Drinking a golden oriole potion would be useful to negate the effect of the soup.

The bubble briefly recedes when the Witch descends some distance towards the ground to use her soup attack. During such a moment, either the Aard sign, or a shot from a crossbow will force the Witch to the ground where she may be conventionally attacked, for example with a sword coated in relict oil. While the Witch is grounded, it is best to destroy her broom - or else she will become airborne again shortly after, but not before summoning an archespore or a panther (or both) to her aid.

After killing her broom, all that is left is to finish her off, which can be made easier by throwing a Dimeritium bomb of any grade at her. This will make her drop her cauldron, disabling her soup-based and slamming attack and leaving her with the typical and supposedly familiar moveset of a Water hag, albeit faster and with longer reach. 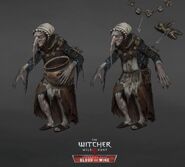